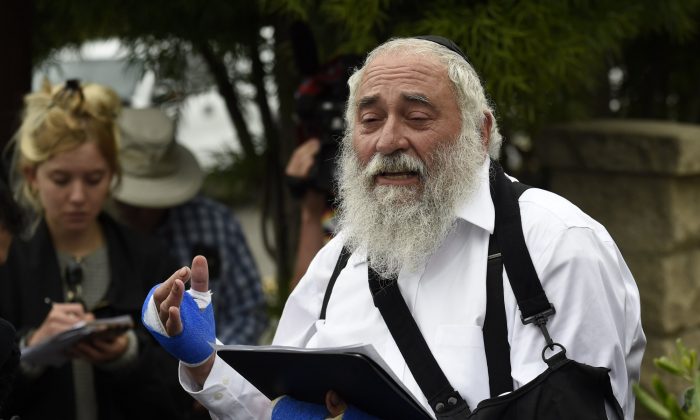 SAN DIEGO—Former Chabad of Poway Rabbi Yisroel Goldstein was sentenced to 14 months in prison on Jan. 4 for engaging in a series of fraudulent schemes, most notably a tax fraud in which supposed charitable donations made to the synagogue were funneled back to donors.

Goldstein, 60, was also ordered to pay nearly $3 million in restitution to victims, which include the Internal Revenue Service (IRS) and companies that matched donations their employees made to the Chabad.

“I stand here today, my head bowed in shame, remorse and disappointment over the crimes that I have committed to God and mankind,” Goldstein said while addressing the court Tuesday.

In what prosecutors have termed the “90/10” scheme, Goldstein accepted charitable donations and then would send about 90 percent of the funds back to the donors, while pocketing the remainder for himself. Donors would then falsely claim on tax forms that 100 percent of their donations went to the Chabad, with Goldstein providing the false donors with fake receipts.

In addition to the money Goldstein returned to them, co-defendants whose employers took part in corporate donation matching programs also pocketed the matching donation amounts provided by the companies, which were defrauded out of at least $144,000.

The U.S. Attorney’s Office said Goldstein received at least $6.2 million in fake contributions and ultimately kept more than half a million dollars through the course of the fraud, resulting in tax losses to the IRS exceeding $1.5 million.

In a separate scheme, Goldstein also fraudulently obtained nearly $1 million in grant funding with the help of forged documents provided by ex-real estate agent Alexander Avergoon, who was sentenced Monday to more than five years in prison for defrauding investors.

Goldstein pleaded guilty in 2020 to federal fraud charges and was subsequently removed from the Chabad.

Despite a joint recommendation of home detention from prosecutors and Goldstein’s attorneys, custody was warranted, according to U.S. District Judge Cynthia Bashant.

The judge said many of Goldstein’s co-defendants thought their offenses would ultimately benefit the Chabad, but she added, “Really, it was just to benefit you. It was for your personal benefit and your own greed and I can’t ignore that fact.

Goldstein was ordered to surrender to authorities by Feb. 23 to begin his sentence. His attorneys requested that the judge recommend Goldstein serve his sentence at Federal Correctional Institution Otisville, a facility in New York state that Goldstein’s attorneys said was more accommodating for practicing Jews.

When charges were announced against Goldstein, prosecutors credited him for his leadership in the wake of the 2019 shooting and said they would recommend probation in light of his cooperation with authorities, which led to several co-defendants’ guilty pleas.

“Yisroel Goldstein exploited his position and stature as a faith leader to commit well-planned and carefully executed crimes of greed,” U.S. Attorney Randy Grossman said. “As his serious criminal conduct was under investigation, the rabbi became a victim in a devastating attack on the synagogue he led. Today’s sentence accounts for these extraordinary circumstances and our office’s mission to always seek justice.”