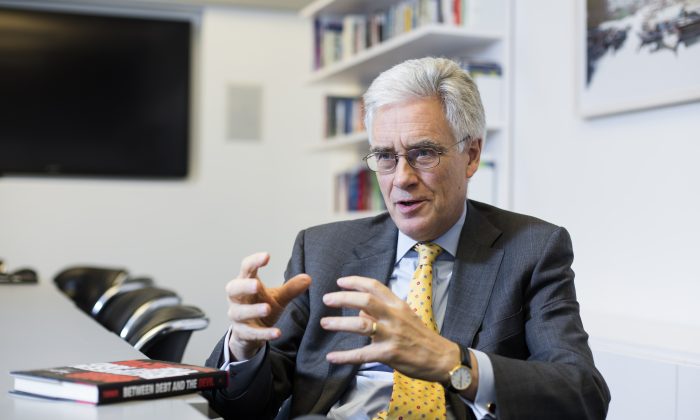 Adair Turner, Baron Turner of Ecchinswell is not your average regulator. First off, he steered the British banking system through the financial crisis of 2008 as the head of the Financial Services Authority (FSA), Britain’s former financial regulatory body.

But how is that different from other regulators such as Timothy Geithner and Ben Bernanke?

He started to ask questions going beyond capital ratios and counterparty risk management. He questioned the whole financial system itself and came to the same conclusions previously reserved to rogue economists such as Hyman Minsky and Steve Keen.

Ultimately the Chinese regime is responsible for the debts of the banks.

In his book “Between Debt and the Devil” he analyzes the dangerous effects unrestrained bank credit has on the economy. He reserved a special chapter for China, where state banks are solely responsible for managing the money supply and therefore the whole economy.

Epoch Times: China has created a lot of money through its banking system and yet people still think the country’s debt level is low.

Adair Turner: China has had a massive increase in debt to GDP. It really is an extraordinary phenomenon, this increase over the past five years. It’s bank credit but also off-balance-sheet credit.

Some of it is extended in a set of complicated shadow banking activities through things like wealth management products and things which are special-purpose vehicles.

They are not entirely off the bank balance sheets because when they go wrong, the banks feel the need to bail them out or are under pressure to bail them out. It’s a terrible combination of a lack of clarity as to where the real credit risk lies and whether something is guaranteed or not. This is always a terrible situation to be in, wondering whether something is guaranteed by the bank or not.

Epoch Times: Why did they create so much credit?

They poured concrete all over the place.

Offsetting the deleveraging of the rest of the economy was to deliberately launch a very big credit-fueled investment boom in China. The Chinese investment rate went up from an already unbelievably high 42 percent of GDP to about 49 percent of GDP.

They poured concrete all over the place, they built six-lane highways, they bought apartment blocks, and channeled huge lending to local governments.

They channeled huge lending to state-owned industries in heavy industries such as steel, cement, and concrete, fueling this construction boom; a boom of enormous construction credit financing.

That has essentially run out of steam and now there are falling property prices, at least in some parts of the economy. Though every now and then the government deliberately tries to keep the thing going.

One of the dangers when you’ve got a credit boom like that going is: You’re terrified of keeping it going. If you keep it going for longer you’re going to have a worse problem when you eventually stop.

But you’re terrified of stopping it because the moment you stop it you’re going to have a whole load of unemployed builders and steel mills with excess capacity.

Mr. Turner: What has been playing out in China for the last year is the tension of the government worrying about too much credit but worrying about what happens when they slow the credit and there’s been a set of policy responses that are not entirely coherent. They suggest that policy derives from a competing process from many different bits of the government.

There’s been a set of policy responses that are not entirely coherent.

The net effect of all that is there’s a very major slowdown occurring in the Chinese economy and probably a bigger slowdown than is in the official statistics.

Financial Crisis Made in China

So it’s possible for the Chinese government to perform a set of accounting gimmicks moving the debt all to the central government balance sheet and control the financial effect.

If you keep it going for longer you’re going to have a worse problem when you eventually stop.

So I don’t anticipate that this is going to produce a sudden domino effect where one bank goes down, so another bank goes down, which we had in 2007 to 2008. Ultimately the Chinese regime is responsible for the debts of the banks.

But I do think this is having a major deflationary effect on the world economy, which we are seeing in the Asian supply chains, throughout the commodity markets and this is giving a further twist to the deflationary post-crisis-debt overhang, which we were stuck in anyway.