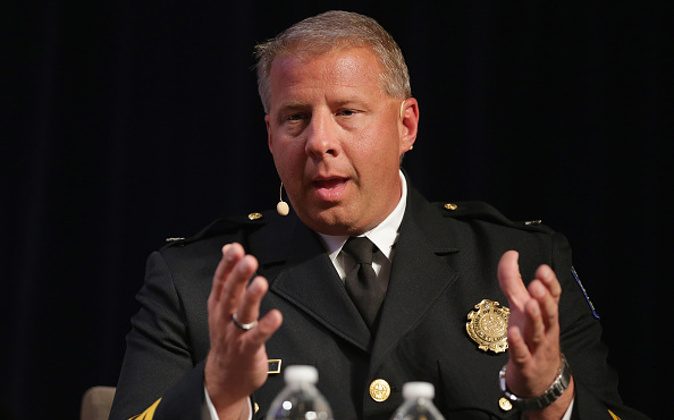 WASHINGTON, DC - JANUARY 20: St. Louis Police Chief Col. Sam Dotson participates in a panel discussion during the U.S. Conference of Mayors 84th Winter Meeting at the Capitol Hilton January 20, 2016 in Washington, DC. Emanuel talked about his experience during the recent upsurge in violence Chicago during the discussion about reducing violence and reinforcing trust between police and the community. (Photo by Chip Somodevilla/Getty Images)
US

A couple was shot and killed, a third victim was wounded, and an officer was grazed by a bullet in a shooting in St. Louis, Missouri, officials said on Thursday.

The group was on the porch of a home a dispute took place, which prompted the ex-boyfriend to pull out his gun, according to St. Louis police chief Sam Dotson.

As shots were being fired, two officers arrived on the scene in a police car. As the officers got out of the vehicle, the suspect shot at them, with one bullet hitting the passenger-side door of the police car, and another bullet grazing the officer’s shin. The injured officer, who was later treated on  the scene,fired back.

After the initial with the police, the suspect fled, discarding his gun along the way. But since to the suspect was familiar to law enforcement as well as witnesses living in the neighborhood, the suspect was located a few blocks away.

Jacara Sproaps, 38, was identified as one of the victims. She’s an Elementary school principal at Dunbar Elementary School.

St.Louis public schools released the following statement on Sproap’s death: “Ms. Sproaps was a talented and dedicated principal and a true champion for children. She was taken from us much too soon. She will be missed by her students and co-workers in the District, but she will never be forgotten.”

Dotson added that the incident, which comes on the heels of last week’s Dallas shooting, further justifies the decision to have officers working in pairs.

“When you have individuals that have guns, that are known to law enforcement, that are willing to use their guns in boyfriend-girlfriend disputes, and when police are called, and police respond, to turn that weapon on police officers and fire shots at them — I think we have to take every precaution to keep our police officers safe,” he said.

Sproap’s son is currently at a local hospital in critical but stable condition. Homicide detectives are investigating the crime.