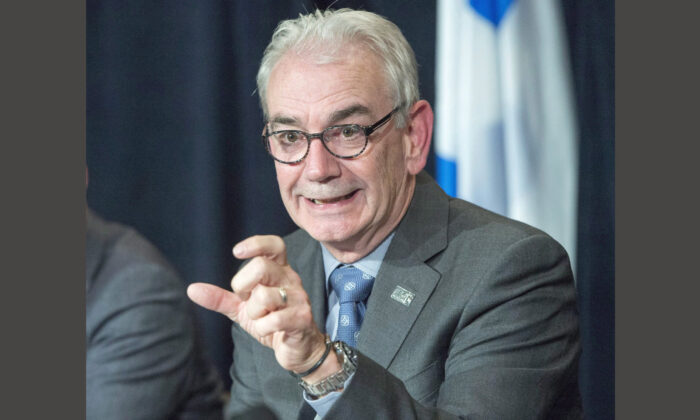 UPAC commissioner Robert Lafrenière speaks to the media at a news conference in Montreal on Oct. 31, 2017. (The Canadian Press/Ryan Remiorz)
Canada

A Quebec court judge is accusing the former head of the province’s anti-corruption unit of derailing a high-profile fraud trial by orchestrating a system of controlled leaks to the media.

Judge André Perreault says in a heavily redacted court document that Robert Lafrenière was behind sensitive leaks to journalists in order to pressure the government at the time to renew his mandate as head of the anti-corruption squad.

The revelations are included in a 2020 court ruling involving ex-deputy premier Nathalie Normandeau, who was granted a stay of proceedings due to unreasonable delays in her fraud case.

The information was only released this week because the 81-page court decision was kept under a publication ban that media organizations were able to have lifted.

In his decision, Judge Perreault reproaches Lafrenière and other senior members of the police force, known as UPAC, for “serious misconduct” that he says was largely responsible for delays in Normandeau’s case.

Lafrenière, who resigned in 2018, denied he leaked any information for personal gain in an interview this week with La Presse.

Perreault endorsed the conclusions of Michel Doyon, an investigator with Quebec’s police watchdog, who found that Lafrenière was behind the leaks and was pushing for another mandate and for the squad to be turned into a specialized police unit.