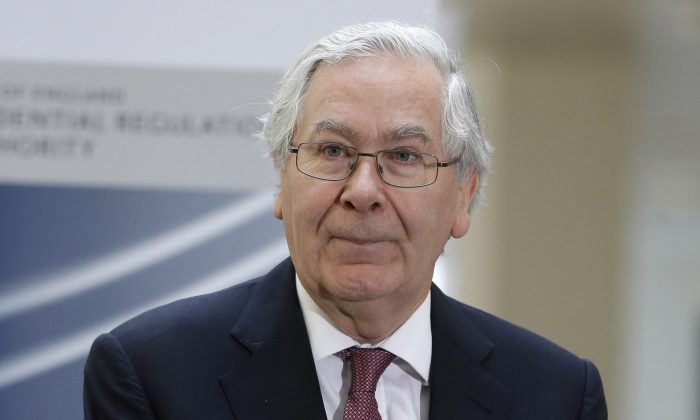 Mervyn King, then governor of the Bank of England, talks to employees of the Prudential Regulation Authority (PRA), during the opening in central London, on April 2, 2013. The PRA, as part of the Bank of England, will become the UK’s prudential regulator for banks, building societies, credit unions, insurers and major investment firms, as part of a wider reform of the U.K. regulatory framework, which also sees the creation of a Financial Policy Committee within the Bank, and a new conduct regulator, the Financial Conduct Authority. (AP Photo/Lefteris Pitarakis)
Business

LONDON—The European single currency is a serious problem for Britain whether or not the country leaves the European Union, a former governor of the Bank of England said Sunday.

Mervyn King said that even though Britain does not use the euro, “we are influenced and affected by what goes on in the euro area.” He says the euro has been economically “a, if not disaster, very serious problem.”

The euro has been economically ‘a, if not disaster, very serious problem.’
— Mervyn King, former governor, Bank of England

Asked on BBC television if that meant Britain should leave the EU, King said Sunday: “I don’t think you can draw that conclusion.”

He said “in or out,” Britain would have close ties to the eurozone.

“The euro area is our biggest trading partner, that’s going to carry on being the case and therefore it does matter to us what goes on there,” said King, who now sits in Parliament’s unelected upper chamber, the House of Lords.

Nineteen of the EU’s 28 members use the euro, which has suffered instability since the 2008 financial crisis hammered the currency’s debt-burdened weaker members, particularly Greece.

Why HSBC Decided to Stay in the UK

Those who want to leave the EU say the crisis shows Britain would be better off outside the bloc.

Economic issues have dominated the debate ahead of Britain’s June 23 referendum on whether to stay in the EU.

London Mayor Boris Johnson, a leader of the “out” campaign, said Sunday that after leaving Britain would be able to negotiate a free-trade deal with the EU while escaping the bloc’s “top-down legislation and regulation.”

But German Finance Minister Wolfgang Schaeuble said countries that wanted access to the EU’s single market “still have to pay into the budget of the community and they have to accept the free movement of people” from EU member states.

“So actually they have all the disadvantages of the common market and they are not involved in the decision-making process of the internal single market,” he said.

If UK Votes for Brexit, Its Borrowing Costs Will Soar—Here’s Why
TOP NEWS