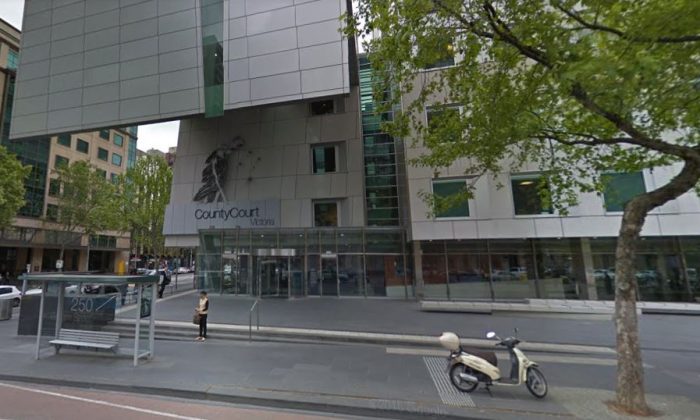 A once-senior Australian diplomat has admitted using a messaging app to find an underage boy for sex.

John Cornelius Finnin, 63, believed he was talking to a 14-year-old boy on Kik Messenger but was actually in contact with an undercover police officer for two weeks in September last year.

Finnin established that the ‘boy’ was underage within the first few days of the conversation, police claimed in court documents released in January.

“I understand you’re nervous. So am I, as you are underage,” one message to the undercover officer said.

Finnin pleaded guilty in Melbourne Magistrates Court on Friday to a single charge of using a carriage service to procure a child under 16 for sexual activity.

Four other charges, including using a carriage service to groom, were dropped.

A once senior trade official for the Australian government covering Europe, the Middle East and Africa, Finnin revealed at his last court appearance that he was now penniless and unemployed.

He’s due to face the County Court in June.

More than 800 Australian visa holders had their visas cancelled in 2018 for serious crimes according to the Australian government.

Australian Home Affairs Minister Peter Dutton said in a press release dated Jan. 7 100 people had their visas cancelled for child sex offences, including child exploitation and pornography. A further 53 have been stripped of their visa for domestic violence, and 34 for rape or other sexual offences.

Of the 500 involved in violent offences, 13 committed murder, seven for manslaughter, 125 for assault, and 56 for armed robbery.

“We welcome people from all round the world, but those few who think they can live in Australia and be involved in criminal actions need to know they won’t be staying long,” Dutton said. “There’s no place in our country for people who come here and harm Australians.”

Since 2014, 4150 non-citizen criminals were stripped of their Australian visas after additional mandatory cancellation provisions were added to the Migration Act.

The changes state a non-citizen’s visa must be cancelled, if they are sentenced to 12 months or more in prison or have been convicted of a child sex offence.

In Oct. 2018, the government introduced into parliament the Migration Amendment (Strengthening the Character Test) Bill 2018 to create a list of designated offences in section 501 of the Migration Act. The list is hoped to provide clear and objective grounds for considering a visa refusal or cancellation.

More than 800 non-citizens were stripped of their visas last year for violent crimes.@JasonFalinskiMP: This is part of our program to make sure the Australian community is safe.

Designated offences include violence, sexual assault, domestic abuse, and the use or possession of weapons whereby the offence carries a two year or more maximum jail sentence.

The Migration Amendment (Strengthening the Character Test) Bill 2018 is expected to be debated in the first sitting period of 2019.

“Over the past five years, the government has stripped 4150 non-citizens of their visas after committing serious and abhorrent crimes, such as child sex offences, domestic violence assaults, and murder,” Coleman said.

Opposition spokesperson for Immigration and Border Protection Shayne Newmann told SBS that Labor supported the deportation of non-citizens, who have committed criminal offences.

“We supported when the government made amendments back in 2014 and we continue to do so,” Neumann said. “If an immigration minister believes someone is a risk to the Australian community, or has reasonable suspicions they fail the character cancellation provisions, then the minister should punt them out of the country of they are a non-citizen.”

According to News Corp, New Zealanders made up many of those who had their Australian visas revoked.

Among them are New Zealand bikie Jim Thacker, and Rebels motorcycle gang boss Aaron “AJ” Graham. Thacker was involved in a brawl and Graham’s visa was revoked on character grounds.

“Foreign nationals who think they can flout our laws and harm Australian citizens should expect to have their visa cancelled,” Coleman said. “It is a privilege to enter and remain in Australia and we have no tolerance for those who put Australians in danger.”