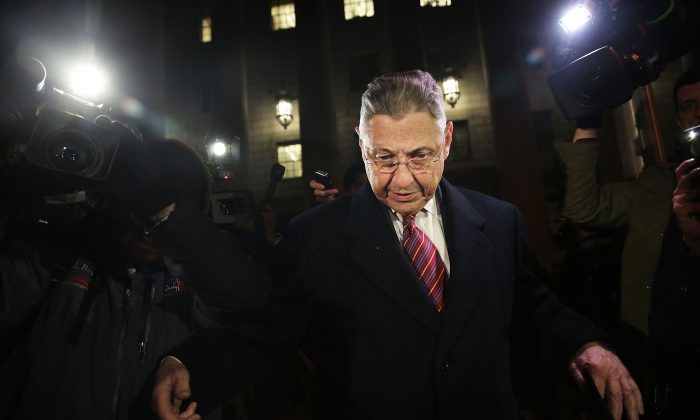 NEW YORK—Former New York Assembly Speaker Sheldon Silver, once one of New York’s most powerful politicians, was convicted on Nov. 30 of charges that he traded favors to earn $5 million illegally and then lied about it.

The Manhattan federal court jury returned the verdict after a three-week trial in which prosecutors claimed that the 71-year-old Democrat repeatedly promised the favors so he could enrich himself. The defense countered that the government was trying to criminalize the longtime routines of politics in Albany.

Even in a state capital where more than 30 lawmakers have left office facing criminal charges or allegations of ethical misconduct since 2000, the case against Silver was an extraordinary turn. An assemblyman since 1976, Silver was one of Albany’s most storied political figures, a consummate backroom operator with the power to single-handedly decide the fate of legislation.

His prosecution was a marquee case in Manhattan U.S. Attorney Preet Bharara’s quest to clean up state government, an effort that has led to the ongoing corruption trial of New York’s state Senate leader, Republican Dean Skelos. After Silver’s arrest in January, Bharara portrayed the case as a product of Albany’s “cauldron of corruption.”

Bharara said that with the verdict, “Sheldon Silver got justice, and at long last, so did the people of New York.”

Silver, who remains free on bail until a sentencing date not yet set, plans to appeal.

“I’m disappointed right now. Ultimately, I believe that after the legal challenges, we’ll get results,” he said as he left court after being convicted of all charges against him: honest-services fraud, extortion and money laundering. They carry the potential for decades in prison.

With the conviction, Silver automatically loses his Assembly seat.

With the conviction, Silver automatically loses his Assembly seat. He had kept it while fighting the charges, although he was stripped of his leadership role after his arrest. He had been speaker since 1994.

Deliberations began and ended with fireworks. Less than two hours after talks started last Tuesday, Nov. 24, a juror tried to beg off the panel, accusing her fellow jurors of claiming she failed to use common sense. But with instructions from Judge Valerie Caproni to respectfully exchange views, jurors settled down and resumed work.

Their discussions were briefly halted again Monday morning, when another juror asked to quit because he’d just learned his boss knows Silver. Caproni told the juror, a taxi driver, to put the relationship out of his mind and return to deliberations.

The government had argued that the trial testimony of 25 witnesses and lots of documents proved Silver traded his office for riches: $4 million in kickbacks from a cancer researcher and real estate developers. Prosecutors say Silver earned a million dollars more through investments.

“This was bribery. This was extortion. This was corruption,” Goldstein said.

“There was no quid quo pro. He did not sell his office,” Molo said.

Silver did not testify. Dr. Robert Taub told jurors he steered numerous patients with cancer caused by asbestos to Silver’s law firm, enabling the legislator to pocket $3 million in referral fees. Meanwhile, testimony and evidence revealed, Silver caused $500,000 in taxpayer funds to go to Taub’s research projects and helped his son and daughter get a job and an internship.

Silver has been on trial simultaneously with Skelos and the senator’s son. Skelos is charged with badgering companies reliant upon his legislative clout to provide over $300,000 to his son.

Skelos and Silver were among a group dubbed the “three men in a room” in Albany, a nod to the longstanding practice of legislative leaders and the governor negotiating key bills behind closed doors. Silver’s arrest came the day after Gov. Andrew Cuomo referred to Skelos, Silver, and himself as the “three amigos” during a budget presentation.

In a measure of Silver’s clout, he helped persuade Cuomo last spring to disband a state anti-corruption commission that was investigating Silver’s financial dealings and those of his colleagues.

In just the past five years, a New York lawmaker was convicted of taking bribes from a carnival promoter. A second filed thousands of dollars in expense claims for days he never even went to Albany. A third got a sham marriage in order to become a citizen. A fourth was accused of harassing female staffers and forcing one to touch cancerous tumors on his neck and armpit.