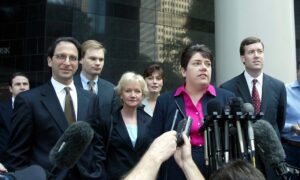 The Russia collusion investigation led by then-Special Counsel Robert Mueller was artificially prolonged in the hope that President Donald Trump would move to terminate it and thus be accused of obstruction of justice, according to former acting Attorney General Matthew Whitaker.

Whitaker, who led the Department of Justice (DOJ) between Nov. 7, 2018, and Feb. 14, 2019, said that, in his opinion, the Mueller team acted inappropriately to create an “obstruction of justice trap” for Trump and his officials.

Former FBI Director Mueller was appointed by then-Deputy Attorney General Rod Rosenstein in May 2017 to take over an FBI counterintelligence investigation to determine whether the 2016 Trump campaign colluded with Russia to sway the election.

By March 2019, Mueller had wrapped it up, saying the probe was unable to establish that any such collusion took place.

Soon after taking command at the DOJ, Whitaker was briefed “on the contours and what was the Mueller investigation,” he said.

“There was no evidence of any criminal conspiracy or connection or collusion, whatever you want to call it, between the Trump campaign, members of the Trump campaign—including Donald Trump—and the Russian government. So, therefore, the primary and sole purpose of that investigation had essentially failed to generate any evidence, and it was clear that that had been known for some time.”

Keeping such an investigation open isn’t the “regular order at the Department of Justice,” according to Whitaker.

He offered a theory as to why it happened.

“There should have been someone along that way that says that not only was there never any evidence, but we developed no new evidence, so, therefore, this investigation must be closed,” he said. “There were so many people involved that could and should have made that decision. And to me, it looks as if it was kept open to harass this president, to undo the 2016 election, and to create an obstruction of justice trap.”

That’s why he couldn’t end the probe, even though, in his position, that would have been the correct thing to do, he indicated.

The point of the “trap” was that “if we had tried to put our thumb on the scale or somehow, in their perception, interfere with the Mueller investigation that they were ready, willing, and able to go after any of us,” he said, calling it “very inappropriate” and “a very dangerous precedent.”

The Mueller team went as far as to mislead their DOJ supervisors about the status of the probe, Whitaker said.

But weeks passed, and the report still didn’t appear.

“I was really surprised … that I had not received the Mueller report, which again, I had been promised several times over the course of those months that I was the acting attorney general,” Whitaker said.

Even his successor, William Barr, had to wait six weeks for Mueller to finally produce the report.

“It seems to me that what the Mueller team was telling their supervisors was not consistent with what was actually going on inside the Mueller investigation,” Whitaker said.

He argued that not just Mueller, but also his subordinates, should be made to explain themselves.

“There are individuals, their names are well known, that should answer these questions and should hopefully get called in front of whether it’s the Senate or some other tribunal to find out why they weren’t being honest with people that supervised them,” Whitaker said.