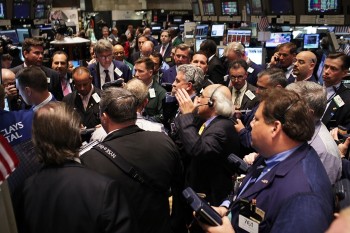 WHERE IT STARTS: Traders work on the floor of the New York Stock Exchange moments before the closing bell on June 1. (Spencer Platt/Getty Images)
Business & Economy

Heide B. Malhotra
View profile
Follow
biggersmaller
Print
Nothing is permanent or static. Evolutionary forces in the material world through direct, indirect, or no interference by humans, affect human existence and lifestyle. In response to changes in the environment, everything changes over time, including the business environment, which turns out to be a very broad subject.

Narrowing it down to stock ownership, some experts claim that it is driven, in a broad sense, by evolutionary forces that arise from changing demands in the business environment, while others say that concrete factors affect stock ownership.

“Since World War II, financial institutions have come to own a far greater proportion of stocks than private households have. Just after the war, individual citizens owned 90% of the stock market; by 2006, they owned only 30%,” according to the 2010 Stanford Business Magazine article.

The researchers discovered that in the 1980s, mutual funds (companies that invest money from many individuals in stocks, bonds, or other assets and hold them in a portfolio), pension funds, or insurance companies held less than 4 percent of all stocks in their portfolios, while today, they hold 70 percent of U.S. stock in their portfolios.

Just as Jim Saxton, the researchers in the Stanford article argued that stock ownership is driven by more mundane factors, that is, by a country’s tax policy, and not by popular public demand or evolutionary factors.

In another article on the VOX website, a think tank for economic policy research, the authors quote a 1986 publication that states that “tax policy changed the ownership structure of the US stock market.”

The researchers point to the country’s tax policy concerning retirement savings and that pensions greatly affect decisions as to how to invest disposable income.

Individual stock ownership is subjected to heavy taxes, such as a capital gains tax, when one sells the stock at a profit. Also, dividends earned through the years are subject to income tax.

On the other hand, pension plans are subject to a favorable tax code, a two-pronged vehicle: One pays no taxes while the money is invested in the fund and less taxes when one draws down the so-called savings, as one has a lower income in retirement.

When it comes to retirement funds, “employers and employees can contribute pre-tax dollars, which means that households can reduce their marginal tax rates by shifting taxable income from high-income work years to low-income retirement years,” according to the VOX article.

The researchers concluded that tax policies drive stock ownership, and the forces that have responsibility for tax policy should take note. In retrospect, should tax policy change and pension plans become subject to taxation, the composition of the stock market would change significantly.

“Pension funding levels at large companies improved modestly at the end of last year, largely due to the moderate stock market gains and employer contributions,” according to an April press release issued by Towers Watson (TW), a consulting firm.

But “while the aggregate funding status increased over the last year, funding status has still declined by $267 billion since the end of 2007, when the average pension plan was fully funded,” said the Towers Watson press release.

A $485 billion drop in 2009 investment earnings was the main factor for the decrease in pension assets. The pension funds did not do any better in 2008, when a $440 billion decline was noted.
With respect to corporate pension funds, many of the funds are frozen (30 percent) as no new participants are allowed in, and the funds no longer accumulate any benefits, although they still show a little life. A small percentage (3 percent), have ceased to exist or are on the way to being closed out. About 31 percent of these plans are still viable and accrue benefits, but allow no new employees into the plans. Only 36 percent of the funds are functioning and will accept new entrants.

“With such a high percentage of plans currently being closed or frozen, it is important that plan sponsors have a full understanding of how to de-risk the portfolio as funded status improves,” said the SEI Institutional Group, a manager of pension and other funds, in a recent press release.