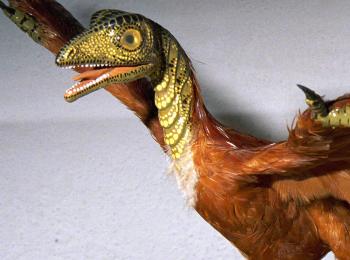 This model of the bird Archaeopteryx has scales on the head, although scientists never found scales in the fossil. (Courtesy of Carl Werner)
Science

Where did we come from? Evolution? God’s creation? For years, scientists have claimed that they have gripping fossil proof of evolution, yet Missouri-based biologist, physician, and television producer Dr. Carl Werner dared to question.

With the coming of the 150th anniversary of Charles Darwin’s “On the Origin of Species” (Nov. 24, 1859), Dr. Werner recently released the first two volumes of books and a documentary from his series challenging Darwin—”Evolution: The Grand Experiment.”

His years of quest for the truth about evolution started with a college bet.

“I was in college in medical school, and a friend challenged me about evolution. I was believing in evolution,” Dr. Werner said.

“He said that the laws of chemistry would preclude life forming by itself, and he basically challenged me: ‘How could this have happened if evolution would violate what our normal science principles are.’ And I really had to think hard about that, and I realized he was correct about chemical rules.”

Since then, Werner went on what he called “a life-long adventure.” He read and researched every topic he could find on evolution, including geology, biology, paleontology, biochemistry, and cosmology. After 18 years of study, he considered himself and his wife ready to begin a series of experiments to test Darwin’s well-accepted theory.

For the next 10 years, from 1997 to 2007, they traveled to the best museums and dig sites around the globe, interviewed the world’s top scientists, and photographed tens of thousands of original fossils and the fossil layers where they were found.

“In the beginning I had much confusion about the topic. What was true? Was evolution true? Or was it not? But in the end, I had such great satisfaction now that I understand what the problems were in evolution and how it works out,” Werner said.

Rather than answering whether evolution is true or false in his documentary, Werner presents the problems and allows the audience to decide.

Scientists have considered a fossil of Rodhocetus, a four-legged animal with a whale’s tail, as the best proof of evolution.

However, when Werner traveled to see the fossil, he did not see any fossils of the tail of Rodhocetus. When questioned, the scientist who added the tail to Rodhocetus in museum diagrams admitted that Rodhocetus did not have a whale’s tail or flippers.

Other problems that Werner pointed out include a scientist attaching a dinosaur’s tail to a bird, and museums attaching feathers to a dinosaur, adding scales in a bird’s head, and attaching human hands and feet to Lucy, the fossil widely believed to be of an ape-man.

In short, he said that although evolution charts at museums suggested that evolution was true, these diagrams lacked corroborating evidence.

“Basically what I read in the college textbook was in contradiction to what I was finding out in the field when we did the interviews with the scientists. So there was great disparity between what was written and what the reality was,” Werner said.

“There’s a lack of candor in the universities on this one topic. It is kind of a closed topic. Scientists are unwilling to discuss it openly because of fear of repercussion.”