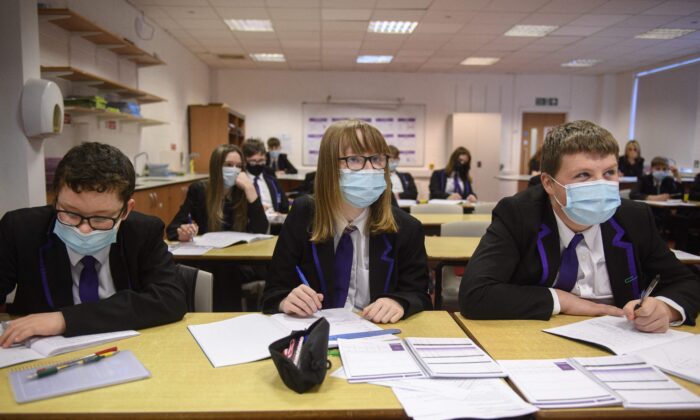 Evidence on Masks in Schools ‘Not Conclusive’: UK Government

The UK government has admitted that scientific evidence on the impact of using masks in schools is “not conclusive,” just three days after it recommended that secondary school students should wear masks inside classrooms to slow the spread of the CCP (Chinese Communist Party) virus.

Face coverings are already recommended in outdoor communal areas and corridors for English pupils in year 7 and above, who are usually aged 11 and above. In its latest guidance issued on Jan. 2, the Department for Education (DfE) recommended that masks should also be worn inside classrooms when the new terms begin after the Christmas break.

But an evidence review published by the DfE on Jan. 5 found that studies have provided “mixed results” and the evidence on the effectiveness of face coverings in education settings remains “not conclusive.”

One of the studies mentioned in the review found that, in secondary schools where face coverings were used, the average COVID-19 absence rate fell from 5.3 percent on Oct. 1 to 3.0 percent on the third week of October—a drop of 2.3 percentage points.

In secondary schools that did not use masks, the average COVID-19 absence rate fell from 5.3 percent to 3.6 percent—a fall of 1.7 percentage points.

Answering questions in the House of Commons on Jan. 5, Education Secretary Nadhim Zahawi cited the study to show “there was a greater reduction in COVID absence” among schools using face coverings than those where masks were not worn.

But the DfE review made it clear that the results were not statistically significant and the greater reduction in absences could be down to chance.

The review also noted the negative effect of mask-wearing on learning.

A DfE survey conducted in March 2021 found that, while 70 percent of pupils agreed that face coverings made them feel safe, 80 percent reported that wearing a face covering made it difficult to communicate, and 55 percent felt it made learning more difficult.

Zahawi faced questions from several Conservative MPs on the mask mandate for schools.

Former Brexit minister Steve Baker said that masks are “an incredible inconvenience to us all and they’re an especially harsh imposition on children.”

Former health minister Steve Brine said he was “puzzled” that “once again we are holding children to a different standard than we are the rest of the population.”

“You know if masks in classrooms why not masks in every single office where people have to go to work?” he asked.

Zahawi admitted that the situation was “not ideal” and possibly “distracting for children.” He said the policy will remain in place “for the shortest possible time” and he hopes they will be able to be removed after a review of data on Jan. 26.