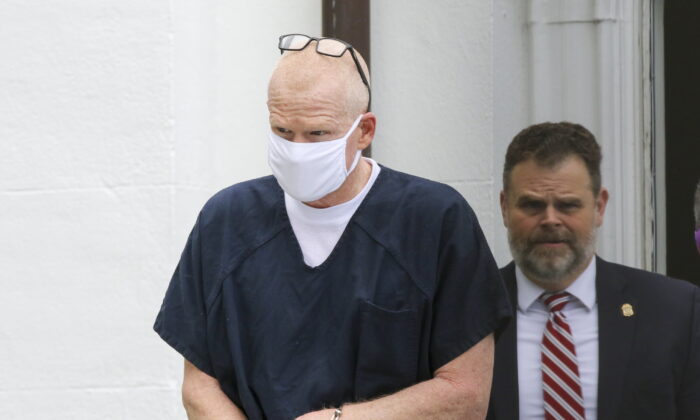 Alex Murdaugh is escorted out of the Colleton County Courthouse in Walterboro, S.C., on July 20, 2022. (Tracy Glantz/The State via AP)
US

COLUMBIA, S.C.—Attorneys for disbarred South Carolina lawyer Alex Murdaugh say prosecutors are taking too long to share their evidence alleging the disbarred attorney killed his wife and son, unfairly making it tougher to defend him at his upcoming trial.

It’s a technical legal dispute that precedes many trials, but because of overwhelming public attention on Murdaugh’s case, attorney Dick Harpootlian called a news conference Wednesday that drew a dozen cameras at which he declared prosecutors want a “trial by ambush.”

Murdaugh, 54, was indicted in July on murder charges in the shooting deaths of his wife Maggie, 52, and their 22-year-old son, Paul, who were killed on June 7, 2021, at one of the family’s homes in Colleton County. He has adamantly denied killing them.

Murdaugh’s lawyers immediately asked for the prosecution’s evidence and court rules require authorities turn it over in 30 days. That deadline was Monday and defense lawyers said prosecutors didn’t provide the evidence because they wanted a judge to decide whether to require a protective order limiting who the defense can show the evidence to and how it handles documents, photos, and recordings.

Defense attorneys said prosecutors waited until Friday to make the protection request so they could delay turning over the evidence after the deadline. Since it took 13 months to finish the investigation, the defense said, prosecutors should already have had a lot of evidence ready to send.

Prosecutors said the only reason the deadline was missed was because defense attorneys initially appeared to agree to the protection order Friday then changed their minds, according to their legal filing in the matter.

Authorities said they want to protect autopsy or crime scene photos from becoming public and other evidence being revealed before the trial.

Someone in the Attorney General’s Office has already leaked information, Harpootlian said. “All I know about blood spatter is what I read in some blog,” he said.

Neither prosecutors nor state investigators have leaked information in the case, state Attorney General Alan Wilson said in a statement.

If a judge found prosecutors intentionally delayed releasing evidence to the defense, that evidence could be left out of a trial, although judges will almost always try to resolve the dispute in other ways, if possible.

The defense said it is waiting for the evidence so it can hire experts to review GPS data that authorities might say linked Murdaugh to the shooting scene or physical evidence like blood and DNA that investigators might say show he fired one of the two guns they said were used in the killings.

“There’s the cellphone data. There’s the data from the black box in his truck. There’s forensics. We’re never seen an autopsy or an analysis of the time of death,” Harpootlian said.

If convicted of murder, Murdaugh would face 30 years to life in prison without parole. Prosecutors could also choose to seek the death penalty under state law because more than one person was killed, but haven’t made any indication that’s what they might do.

The June 2021 deaths prompted authorities to look into all corners of Murdaugh’s life. At least a half-dozen investigations resulted in charges that he stole $8.5 million from people who hired him and that he lied to police by saying he was shot by a stranger on a roadside. Officials say he actually asked a friend to kill him so his surviving son could collect a $10 million life insurance policy just days after the family firm determined he was stealing money. The friend said the gun went off as he tried to wrestle it from a suicidal Murdaugh’s grip.

Murdaugh is familiar with legal wrangling. His family has dominated the legal scene in tiny, neighboring Hampton County for nearly a century with his father, grandfather, and great-grandfather the area’s elected prosecutors for 87 years straight.

Defense attorneys want to take Murdaugh to trial as soon as possible to clear his name. Both sides appear to have agreed on January, with Harpootlian saying at the news conference outside his law office that he wants to stick to that timetable “come hell or high water” and will have lawyers and the rest of his firm doing whatever is necessary to review the evidence whether it is five pages or 5 million pages.

“Ride by here at 11 or 12 o’clock at night, you are going to see the lights on,” said Harpootlian, who when asked another question later in the news conference smiled and said “not me, but somebody who works for me.”