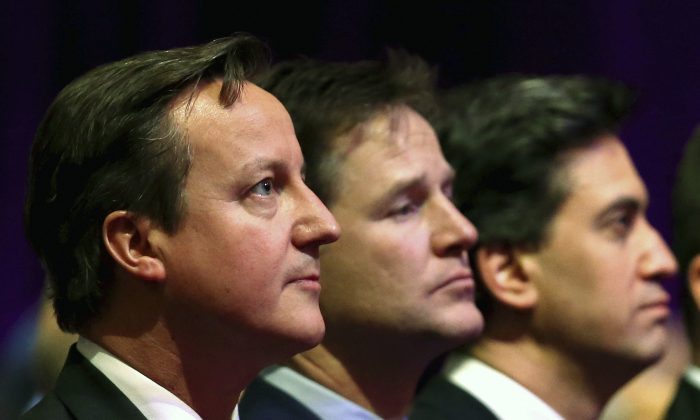 What is Britain voting for on May 7?

Britain is voting for a new parliament, and, by extension, a new government. The election will decide the composition of the House of Commons, and ultimately, who will be prime minister. At the same time, there will be elections for local tiers of government in certain parts of the country.

Who could be prime minister afterwards?

Although there are a large number of parties competing in this election, only the leaders of the Conservative Party and the Labour Party have any real chance of becoming prime minister. Either Conservative incumbent David Cameron will win a second term and so continue as prime minister, or Labour leader Ed Miliband will walk into Downing Street once a new government has been formed.

What does the Queen do?

The Queen has very little to do on election day. It is constitutionally frowned upon for her to vote, and she does not do so. Her constitutional role is simply to appoint the prime minister when the votes have been counted.

It is traditional for the incoming prime minister to be driven to Buckingham Palace where he/she will have a short meeting with the monarch. They will usually then head back down the road to Downing Street, making a short speech to the waiting press outside Number Ten.

So what actually happens on May 7?

The UK is split into 650 parliamentary constituencies, each of which elects one representative to sit in the House of Commons, the lower chamber of the UK parliament. So there are essentially 650 mini-elections happening at once. Most of the candidates will be standing under the banner of one of the main political parties: Conservative, Labour, the Liberal Democrats, the Scottish National Party (SNP—only in Scotland), Plaid Cymru (only in Wales), the Green party, and the UK Independence Party (UKIP).

David Cameron is the leader of the Conservatives, but he still needs to stand as a parliamentary candidate in a constituency of his own, as do all party leaders. This means that while the competition to be prime minister is between David Cameron and Ed Miliband, they will only appear on the ballot paper in their own constituencies and nowhere else in the country. Cameron represents Witney in the west, Miliband is seeking election more than 100 miles away in the constituency of Doncaster North.

Votes are counted constituency by constituency, and the candidate in each constituency with the most votes becomes the Member of Parliament. If a party wins an overall majority of MPs (in this case 326), their leader will become the prime minister. This system is known as “first-past-the-post”—and it’s not terribly popular.

What happens if no party has a majority of seats?

In British politics, it’s unusual for no party to get an overall majority of MPs. But this did happen in 2010, and it is likely to happen again this time around.

Where no party wins an overall majority of seats, there are several options available. Parties can try to form a coalition government with one or more other parties, as Cameron’s Conservatives did with the Liberal Democrats in 2010.

They could also try to form a minority government, whereby the largest party or group lacks a majority but still manages to get legislation through, an arrangement not uncommon in continental Europe and Scandinavia. Taking this approach is more complicated, and would put the prime minister in a more vulnerable position as it would be much more difficult to pass legislation through the House of Commons.

What will they be negotiating over?

To form a coalition government, two or more political parties and their leaders would need to get through an intense period of negotiation. In 2010, it took five days for the coalition negotiations to be completed.

The discussions will inevitably revolve around the key policies put forward in each party’s election manifesto. Each side will have assorted “red lines” – limits to their cooperation which may come in the form of specific policies such as the Conservative Party’s wish for an EU referendum or the SNP’s wish to stop the renewal of the Trident nuclear deterrent, targets for both increased spending and cuts, or perhaps even possible other coalition partners.

Some leaders have proved more willing than others to talk about these before the election. Liberal Democrat Leader Nick Clegg, for instance, has said that he would not join any coalition that also included the controversial Euroskeptics of UKIP.

Ed Miliband has ruled out a formal coalition with the SNP, but could still have to work with them in another, less binding arrangement. He has gone so far as to have his main pledges carved into a stone obelisk—although his election vice-chair then backpedalled, saying “I don’t think anyone is suggesting that the fact that he’s carved them into stone means that he is absolutely not going to break them or anything like that.”

What are some of the likely outcomes?

In recent weeks this has all become even more complicated, as the two main party leaders have all refused to say who they would work with and act as if they’re likely to get a majority. Ed Miliband has ruled out a coalition with the SNP, while the Liberal Democrats have said they will not take part in a government that includes the SNP or UKIP.

So whatever happens, the 2015 negotiations are likely to be much more difficult than they were after the last election.

How does Scotland fit into this?

The House of Commons represents the whole of the UK—England, Northern Ireland, Scotland and Wales. Scottish voters will elect MPs on the same basis as the rest of the UK, but they will have the chance to vote for different parties. The Scottish National Party (SNP) is the largest of these.

What is particularly interesting about Scotland in this election is that the SNP is expected to do much better than it ever has before. Thanks to a surge in membership and support since the 2014 independence referendum, it is forecast to win across many constituencies that have traditionally been won by Labour—potentially stopping Miliband from winning a clear majority of MPs.

He has ruled out a formal coalition with the SNP, but if his party is decimated north of the border, as some predict, he may have no other way of putting a government together.

Louise Thompson is a lecturer in British politics at the University of Surrey in the U.K. This article was previously published on TheConversation.com