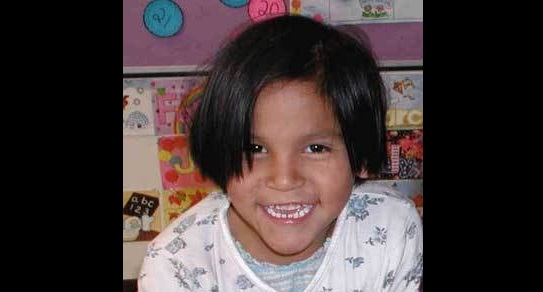 Missing five-year-old Tamra Keepness was last seen on July 5, 2004. The case remained unsolved and the search for the missing girl grew to one of the largest in Regina’s history. (Regina Police Service)
Canada

REGINA—Retired police corporal Jim Pratt remembers standing on a road on the outskirts of Regina as a team of searchers walked through a yellow canola field.

They were looking for a missing Indigenous girl, five-year-old Tamra Keepness. Elders had told police they had visions of the child near rocks, water, and trees.

Pratt says a car with two older white women pulled up beside him, and one peeped out a window.

“Did you find our baby yet?” she asked.

No. And fifteen years later, Tamra still hasn’t been found.

Pratt gets emotional thinking about that day, that unsolved case and the girl so many worried about.

“Race was thrown to the side,” Pratt says. “That little girl became everybody’s baby.”

Tamra and her toothy smile were well-known across Canada in 2004, and the search for the missing girl grew to one of the largest in Regina’s history.

She was last seen about 10:30 p.m. on July 5 of that year as she was going to bed in her home in Regina’s core, where she lived with her mother, stepfather, twin sister, and four other siblings.

She was noticed missing the next day about noon.

“No matter what we did, no matter how many people we talked to, no matter where we searched, we were no closer at the end of that than we were the day that she was reported missing,” says Marlo Pritchard, a staff sergeant in charge of the major crimes unit at the time.

Now chief of police in Weyburn, SK, Pritchard recalls the force was consumed with an urgency to find the little girl.

About 2,000 tips came in and, like a grenade going off with fragments flying everywhere, each one needed to be looked at as a potential lead.

It’s frustrating no one was able to find her, he says.

“It pulls at your heart. It hurts.”

Retired officer Ron Weir, who was called in to set up the search and rescue operation just as he was heading out on holidays, remembers working 20-hour days on the case.

Police were “behind the eight ball,” he says, because hours had passed between the time Tamra vanished and they began searching.

He brought in volunteers to help.

“These people were out there daily with us for months and taking time off their work,” he says.

Police and hundreds of volunteers scoured neighbourhoods, combed through yards and garages and, assuming the worst, looked in trash bins and a local landfill. The search also expanded to Muscowpetung Saulteaux Nation and Pasqua First Nation based on tips from the public and visions from elders.

Regina police did not respond to a request for an update on the case. But this week they released a short video saying investigators continue to search for answers.

The old brown-and-white house from where Tamra vanished still stands on Ottawa Street. Some residents say the neighbourhood has its issues: property crime, women working street corners at night, and people in dark clothing walking around looking inside vehicles.

Posters of a missing Indigenous woman, Jenaya Wapemoose, who hasn’t been seen since March, are taped to lampposts along the block.

Tamra’s cousin, Honey Watetch moved in across the street a few months ago. Having Tamra’s old house so close is hard, Watetch says, and she doesn’t like to talk about it.

Tamra’s father says he feels like crying and harbours guilt over losing custody of his children in the years leading up to Tamra’s disappearance.

The last time he saw Tamra—the brave, giggly, energetic girl who looked most like him, Keepness says she told him she wanted to be home with him.

He’s numbed the pain over the years with alcohol and drugs, he adds, and has also had interactions with police.

“I feel awful about how I’ve been living to deal with issues around my life.”

Keepness has 10 other children who are mostly now grown, he says. He’s proud of his kids. One son recently graduated high school. Tamra’s twin is now in university.

He knows Tamra would be doing well now too, he says, and hopes to one day find her—or at least find out what happened to her.

It’s something he has prayed about.

“I prayed whoever has her would keep her safe and not hurt her,” he says. “And if she’s already an angel, then I said ‘hello.'”

Pratt still advises police on the case, and says he also thinks about Tamra all the time.

“Some day we’ll see her in the spirit world or someday she’ll walk down the street in real life and say, ‘I’m here,'” Pratt says. “That’s how I have to look at it.”

“We’re not going to give up hope.”