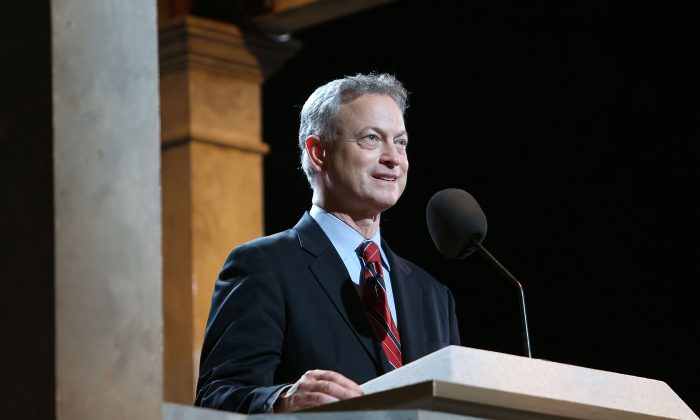 “Everybody Loves Raymond” actress Patricia Heaton said actor Gary Sinise should have been named Time’s Person of the Year for 2018 for his work with wounded veterans.

“Hey @TIME, why isn’t @GarySinise ever on the Person of the Year list? Hey @TheAcademy, why isn’t he ever picked for the #jeanhersholt humanitarian award? He raises $30M a year to build homes for wounded vets along with his #goldstarfamily support. Retweet,” she tweeted. Many agreed with her statement, as it was retweeted thousands of times in just a day.

Hey @TIME , why isn’t @GarySinise ever on the Person of the Year list? Hey @TheAcademy , why isn’t he ever picked for the #jeanhersholt humanitarian award? He raises $30M a year to build homes for wounded vets along with his #goldstarfamily support. Retweet! https://t.co/pj7BGEN7Ds

Sinise founded the Gary Sinise Foundation in 2011, a nonprofit, that supports first responders, veterans, and their family members.

“That’s a very good question. As a huge supporter of #GarySiniseFoundation and #GarySinse he should have been. He does not do it for the accolades, which makes him all that more deserving,” one person said.

“Could not agree more! I had the great honor to see 1st hand a small part of this event & was moved beyond belief! What @GarySinise is doing for these families is above and beyond! Not a dry eye in the house! Thank you Mr. Sinise!” a fan wrote.

Actor and outspoken conservative James Woods tweeted that Sinise “one of the very finest civilian Americans out there.”

I’m taking the liberty of posting a screen grab of @GarySinise’s immediate response regarding our Navy vet’s funeral request. Honestly Gary is one of the very finest civilian Americans out there… pic.twitter.com/ZxysumSyPV

“I’ve traveled to visit our troops in Iraq, Afghanistan, and around the world, and have also performed with my band (Gary Sinise and the Lt. Dan Band) in Kuwait, Afghanistan, Belgium, the Netherlands, Germany, Italy, United Kingdom, Japan, Okinawa, Korea, Singapore, Diego Garcia, Guantanamo Bay, Alaska, and throughout the U.S. in an effort to help boost the morale of our troops and military families. Through my travels I’ve seen firsthand our service member’s extraordinary dedication,” Sinese says on the foundation’s website.

The Mighty on Dec. 11 reported that Sinise’s foundation helped nearly 2,000 Gold Star families to Walt Disney World in Florida. The foundation is now tracking 1,722 participants this year from over 650 families, which includes hundreds of children.

A post shared by Gary Sinise Foundation (@garysinisefoundation) on Dec 9, 2018 at 3:16pm PST

Time awarded The Guardians and the War on Truth as the person of the year. Jamal Khashoggi, Maria Ressa, Wa Lone and Kyaw Soe Oo, and the Capital Gazette will be featured. Khashoggi was killed in the Saudi Embassy in Turkey, and five people were shot and killed inside the Capital Gazette office in Maryland earlier this year.

“Today, democracy around the world faces its biggest crisis in decades, its foundations undermined by invective from on high and toxins from below, by new technologies that power ancient impulses, by a poisonous cocktail of strongmen and weakening institutions,” Time Editor-in-Chief Edward Felsenthal stated. “They are representative of a broader fight by countless others around the world—as of Dec. 10, at least 52 journalists have been murdered in 2018—who risk all to tell the story of our time,” it added.

The runners-up for the designation were President Donald Trump, who was given the Person of the Year title by the publication in the past. Special counsel Robert Mueller was No. 3, The Activists were No. 4, Moon Jae-in was Nov. 5, Ryan Coogler was No. 6., and Megan Markle was No. 7.