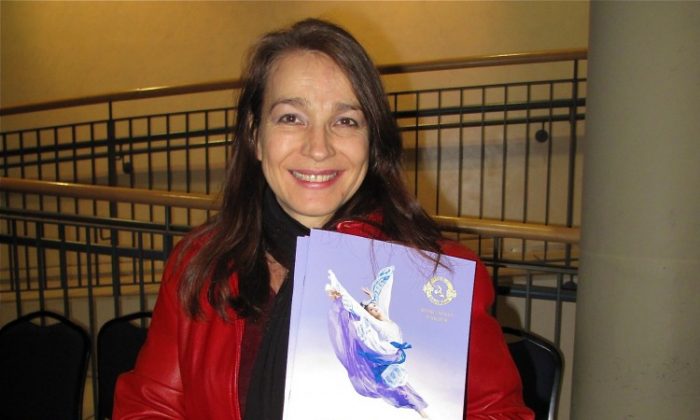 ‘Every young adult should be able to see this show’: Fitness Company Owner

MISSISSAUGA, Canada—Besime Kallaba loved everything about the Shen Yun Performing Arts show she attended at the Living Arts Centre in Mississauga on Friday night, but it was the spiritual undertones in the performance that particularly resonated with her.

“I really enjoy the spiritual aspect of the show,” she said during intermission.

“That’s a beautiful way of making us understand I guess that the spiritual aspect of communicating, which is something that we have forgotten,” she adds.

Ms. Kallaba, founder and owner of fitness company Kicking Sprit, believes it would be motivational for young people to see the show, which showcases Chinese traditional culture—and the values upheld in ancient Chinese societies—through music and dance.

“I think every young adult should be able to see this show,” she said.

“I think they would be very touched and moved, and I think it would inspire them to do something different than just watching television and staying home and playing video games. I think this would motivate them. There should be more children in this audience.”

New York-based Shen Yun came into being in 2006 with a mission to revive China’s 5,000 years of divinely inspired culture. Shen Yun now has three companies, each with its own live orchestra, that tour the world each season.

“I love the colours, I love the costumes, I love the orchestra, I even love the opera singers. The woman was amazing. Her voice—I thought she was on a microphone and it was just her vocals. I was left more or less shocked—it was really wonderful to see that.”

She was referring to soprano Pi-ju Huang who sang “Do Not Lose Your Way.”

She was highly impressed with the dancers in Shen Yun, which features classical Chinese dance as well as ethnic and folk dances.

“The dancers are amazing,” she said.

“They’re so professional, they’re so elegant; they’re very dramatic. I could tell they’re spending hundreds of hours and you could see the perfection in their moves. And the unity—I really like that too.”

She noted the gracefulness of the dancers.

“The young ladies when they are just floating [across the stage], it was like watching them on roller blades, and when the guys are spinning and even when the girls are spinning it is like they’re skating, and yet they are on their flat shoes … I just really enjoyed it.”

According to the Shen Yun website, classical Chinese dance has a long history of thousands of years, passed down continuously within the imperial palace and ancient Chinese theatre and opera.

“Soaking up profound wisdom from every era and dynasty, it has become a complete system of dance embodying traditional aesthetic principles with its unique dance movements, rhythms, and inner meaning,” the website says.