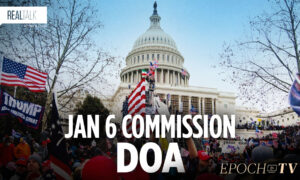 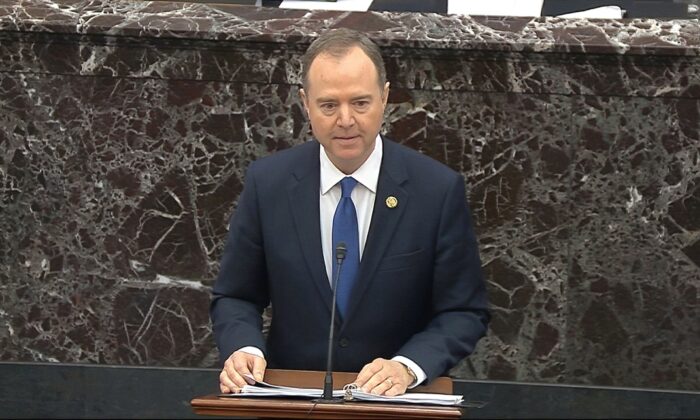 House impeachment manager Rep. Adam Schiff (D-Calif.) speaks during closing arguments in the impeachment trial against President Donald Trump in the Senate at the U.S. Capitol in Washington, on Feb. 3, 2020. (Senate Television via AP)
Congress

When Speaker of the House Nancy Pelosi (D-Calif.) announced which Democrats were to serve on her Select Committee to Investigate the January 6th Attack on the United States Capitol on July 1, she told a news conference that the panel’s purpose was “to seek and to find the truth … in the most patriotic and nonpartisan way, so the American people have confidence in the results.”

After Pelosi rejected two of House Minority Leader Kevin McCarthy’s five Republican picks to serve on the select committee, whose first hearing was held on July 27, he claimed that the panel had “lost all legitimacy and credibility.”

Pelosi accused Reps. Jim Jordan (R-Ohio) and Jim Banks (R-Ind.) of “statements and actions” that would undermine “the integrity of the investigation,” presumably including their votes against the creation of the committee.

In response, Jordan and Banks accused Pelosi of rejecting them because she knew they would demand answers as to why the U.S. Capitol Police, which is under her control, wasn’t prepared for the Jan. 6 breach of the Capitol despite being warned days ahead of time that trouble was brewing.

McCarthy withdrew all five of his nominees, so Pelosi added Rep. Adam Kinzinger (R-Ill.) as the second and last Republican member of the panel, joining Rep. Liz Cheney (R-Wyo.). Both Kinzinger and Cheney voted to impeach Trump following the riot.

All seven Democrats on the select committee also voted to impeach Trump a week after the Jan. 6 breach and to hold him responsible for the day’s events.

That vote was the second to impeach Trump for several of the panel members, including the chairman, Rep. Bennie Thompson (D-Miss.). Thompson also sued Trump after the Capitol incursion, claiming he incited it.

Raskin was a member of the House impeachment team that presented the case to the Senate for Trump’s responsibility for the riot and helped draft the impeachment articles that were approved by 222 House Democrats and 10 Republicans.

Schiff, as chairman of the House Select Committee on Intelligence, was the leader of the first impeachment campaign against Trump, based on accusations that the chief executive had abused his powers in making U.S. aid to Ukraine contingent upon that country providing negative information about then-former Vice President Joe Biden.

Schiff also claimed to have viewed “direct evidence” that Trump had conspired with Russians to steal the 2016 election from Democratic presidential nominee Hillary Clinton. Schiff has never provided or described any such evidence despite repeatedly claiming to have seen it.

Shortly after casting his vote to impeach Trump, Aguilar issued a statement saying, “When the President sent a mob to the Capitol, radicalized by his lies about the results of a free and fair election, to stop the counting of electoral votes he made it clear that he poses a grave threat to our democracy.”

Lofgren voted to impeach Trump in 2019 and told the House that she would support the second Trump impeachment because “the President incited right-wing terrorists to attack the Congress to try to overturn constitutional government.”

Similarly, Murphy, who voted to impeach in 2019, defended her second impeachment vote against Trump, saying, “The mob was incited by the President.”

With such a makeup of Pelosi’s select committee, two attorneys defending individuals arrested in connection with the Jan. 6 incursion told The Epoch Times on July 26 in a statement that the panel will damage the ability of the more than 500 facing charges to get fair trials.

“These hearings are not an objective search for truth, but rather a deliberate attempt by Nancy Pelosi’s House of Representatives to thwart the judicial process by creating subjective evidence for the Department of Justice to use during January 6th criminal trials and to continue poisoning jury pools beyond repair,” attorneys Joseph McBride and Steven A. Metcalf said.