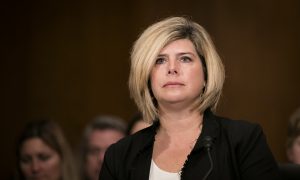 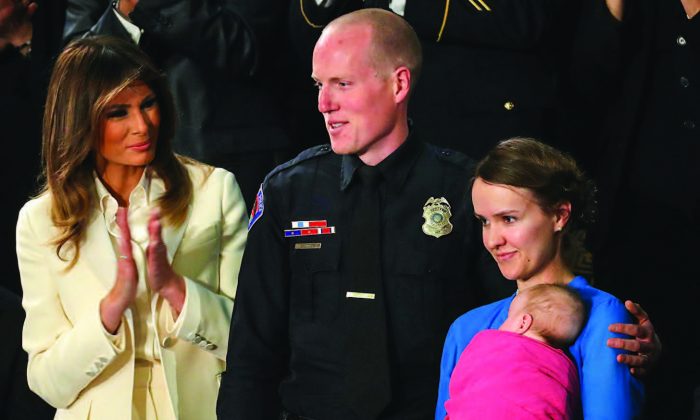 Ryan and Rebecca Holets, with the baby they adopted from a mother who was addicted to opioids, stand next to First Lady Melania Trump at the president's State of the Union address in Washington on Jan. 30. (CHIP SOMODEVILLA/GETTY IMAGES)
US Features

Every 15 Minutes, a Baby Is Born Addicted to Opioids

WASHINGTON—The opioid crisis is ravaging the ranks of the tiniest Americans every day.

Thousands of babies are born addicted to opioids and are suffering withdrawal after birth, known as neonatal abstinence syndrome (NAS).

By 2014, one infant was born almost every 15 minutes with signs of drug withdrawal, according to Dr. Stephen Patrick, pediatrician and neonatologist at the Monroe Carell Jr. Children’s Hospital at Vanderbilt in Nashville, Tennessee.

He has too many tragic stories to count.

“Recently I was caring for a sick infant at Vanderbilt who had been transferred to our neonatal intensive care unit from the newborn nursery,” Patrick said at a Senate hearing on Feb. 8. “The infant had trouble feeding, was jittery, and had a rapid weight loss—more than 10 percent of his body weight in a few days. Something was wrong.”

He said the infant was exhibiting classic signs of NAS, but it can be difficult to diagnose in a newborn.

The majority of women in need of treatment for opioid addiction do not receive it.

“Over the next few days, the infant was increasingly irritable, continued to have difficulty feeding, increased muscle tone and muscle jerking. We suspected opioid withdrawal, but the mother denied using any drugs. Despite this, we started treating the infant as we would any infant with the syndrome,” Patrick said.

After a week, the umbilical cord drug screen came back positive for an opioid.

“As I walked into the infant’s room to talk to his mother, I could sense her guilt and anxiety,” Patrick said. “She cried as I talked to her about the drug test, and wondered aloud if she would lose custody of her infant. She had been afraid of my response and the response from child welfare.”

Patrick said the mother had become addicted to opioids after an accident, was not able to get treatment for her opioid use disorder while pregnant, and was too scared and ashamed to ask for help.

This dangerous combination of circumstances is a daily tale around hospitals in the United States.

“If a woman is fearful of criminal punishment, she may avoid prenatal care, go to another state to deliver, or even deliver at home, potentially resulting in adverse outcomes for mother and baby,” Patrick said.

He said infants are usually discharged from hospital 24 to 48 hours after being born, but signs of drug withdrawal may not develop until 72 hours or later.

“If women are unwilling to disclose substance use, their infants are at risk of experiencing withdrawal at home with potentially dire health consequences, including death,” he said.

Once rare, the NAS diagnosis has become increasingly common. Patrick’s team’s research found that the number of infants diagnosed with neonatal abstinence syndrome has grown nearly seven-fold from 2000 to 2014.

In 2015, Americans were prescribed three times as many opioids as they were in 1999, Patrick said. Eighty percent of new heroin users start their addiction through prescription pills.

“Primary prevention of opioid use disorder begins with preventing unnecessary opioid use well before pregnancy,” Patrick said. He said education, as well as decreasing the supply and overprescription of opioids, is critical.

Women with opioid use disorder are nearly twice as likely to have an unplanned pregnancy, Patrick said, adding that improved access to contraception, including long-acting reversible contraception, is vital.

But, once an opioid addict is pregnant, access to treatment must be expanded.

Despite this evidence, Patrick said the majority of women in need of treatment do not receive it.

“These are infants that are increasingly fussy, they have difficulty breathing and difficulty feeding. Sometimes they have seizures. So you can imagine what that is like for a family to go through and for an infant to go through,” he said.

Infants experiencing severe NAS require treatment with an opioid like morphine or methadone, and stay in the hospital an average of more than three weeks, he said.

Nationally, over 80 percent of infants with NAS are enrolled in state Medicaid programs, accounting for the majority of the estimated $1.5 billion in total hospital charges for the syndrome, Patrick said.

The approach to NAS care at Vanderbilt has changed in recent years as the crisis has worn on.

“No longer do infants with NAS come to the neonatal intensive care unit—they stay with their mom, if possible,” he said. “We find that keeping moms and babies together decreases the severity of the drug withdrawal” and helps keep the mother-child bond intact.

“That period of time going home is just so critical. And right now, the way it feels for me when I discharge an infant home is that it’s uncoordinated and it puts a lot of stress on a family that already has a lot of stress,” he said. “The current system is disjointed and does not consider the needs of the mother and infant together.”

Not the First Epidemic

Dr. William Bell, president and CEO of Casey Family Programs, relates to his experience of being in New York City during the middle of the crack epidemic.

Casey Family Programs has a mission to reduce the need for foster care.

Bell said there is no typical process for pregnant addicts because states are at varying levels of response.

“Some states still say it’s prima facie child abuse, ‘We need to keep you away from this child,’” he said. “There are other states saying, ‘No, this is a person who is wrestling with a very devastating disease and we need to change our systems and protocols so that we can help lift them up.’”

Ohio recently launched a pilot program called START (Sobriety, Treatment, and Reducing Trauma), which aims to keep children at home or return them home as quickly as possible.

“The referral to the START program begins when an expecting mother has tested positive either in the second trimester or the third trimester for a substance,” Bell said, adding that a positive drug test also triggers an immediate referral to child welfare. “At any stage, it has become a prima facie challenge of abuse and neglect to have a positively-exposed child in utero.”

The START team steps in and goes to the family home to conduct an assessment. The team includes a peer mentor, who is someone in addiction recovery and/or has lived in the child welfare system.

The family can then choose to participate in the START program, which will assist with treatment, recovery, transportation, and peer support.

Bell said the use of drug treatment courts is a huge step toward keeping families together.

He said timely access to comprehensive substance use treatment options—including family residential and family-centered treatment, peer mentors, medication-assisted therapy, residential treatment for pregnant mothers and recovery supports—have been effective in aiding addicted parents in their recovery and reunification with their children.

Despite best efforts to keep families together, almost 270,000 children entered the foster care system in fiscal year 2015—an increase over the previous fiscal year.

“While parental substance abuse is not a new challenge for child welfare agencies, the current opioid epidemic is proving to have an immeasurable impact on foster care caseloads and child welfare budgets across the country,” Bell said.

He said at least 35 percent of the entries into foster care were due to parental substance abuse.

“One of the most traumatic experiences a child can have is to be forcefully removed from their family,” Bell said.

Bell said states can help children avoid foster care if they can invest federal child welfare resources in a mix of efforts including prevention, early intervention, aftercare services, and treatment.

“Our goal is for children to be free from abuse and neglect, surrounded by strong families and supportive communities,” Bell said.

In parallel with the increase in foster numbers, there has been a big jump in the number of extended family members taking in children.

Around 2.6 million grandparents are raising children, according to 2015 census statistics.

“Many relatives and child welfare professionals have cited a direct correlation between the spike in relatives caring for children and the national opioid epidemic,” Bell said. “Unfortunately opioids is not the first time we’ve been in this position.”

Bell said the same thing happened during the crack epidemic, and they called it “skip generational parenting.”

“What we found was that they needed support groups, they needed financial support, they needed a navigator-type program that would help them understand where to go,” Bell said. In response, New York City set up a grandparent resource center, which was run through senior centers and other community resources, so grandparents would not be alone in caring for the child.

“I think that’s something we could do in this situation as well,” Bell said.

Both Bell and Patrick said Congress has taken some important steps in addressing the opioid crisis, but could do more, especially around access to treatment.

Bell said for every $7 the federal government spends on foster care, only $1 is spent on prevention, despite evidence that children thrive more if they can avoid foster care.

He suggests reforming how the federal child welfare funds are spent to allow states and localities to target how they support families.

“Despite all the devastation that we have witnessed and all that you have heard from us today, I still believe that there is hope,” Bell said. “And I believe in the inherent power that hope brings to those in need of help.”