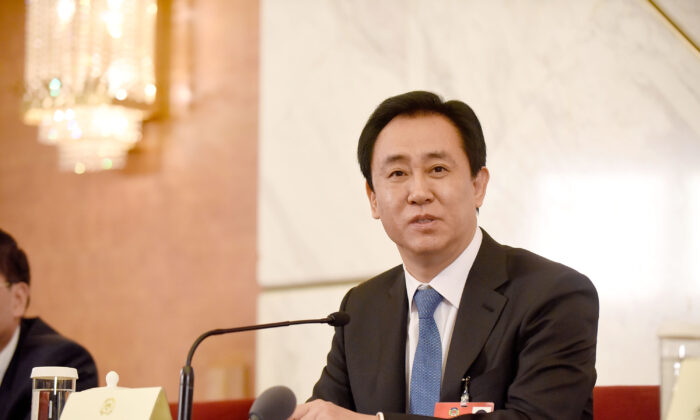 Xu Jiayin, Standing Committee Member of the 12th CPPCC National Committee and Chairman of the Board of Evergrande Group speaks during a news conference on the sidelines of the fourth session of the 12th National People's Congress, on March 6, 2016 in Beijing, China. (Etienne Oliveau/Getty Images)
China Business & Economy

China Evergrande Group’s inability to pay off millions in debts has resulted in the introduction of a risk resolution working group with the Chinese regime’s intervention. Xu Jiayin, the founder and chairman, has been pushed to sell his family’s assets, including a mansion in the Hollywood Hills sold at a loss of $5 million.

Located on three floors on Sierra Alta Way near the famous Sunset Strip, in Los Angeles, the luxury home has five bedrooms and ten bathrooms, as well as a theater, gym, sauna, bar, gallery, and underground parking with seven spaces.

The real estate media disclosed that the mansion was valued at $22.9 million when it was built in 2015 and was first sold to Xu Jiayin’s family for $17.5 million in 2018.

Xu, who urgently needed to sell his house for cash, quoted an initial listing price of $18.5 million, then reduced it to $17 million, but there were no takers.

Sina, a Chinese portal site, reported the same day that Xu had sold 7 billion yuan (about $1.12 billion) of his family’s assets to “maintain the life” of Evergrande. The assets sold included three villas in Hong Kong and a private jet. The properties in two southern cities of Shenzhen and Guangzhou are being put up for sale.

Chinese authorities had urged Xu to pay Evergrande’s debts out of his own pocket, which exceeded $300 billion as of June 2021. Xu cannot plug the debt hole even if he empties his own assets Bloomberg said on Oct. 26.

According to Sina, Evergrande issued an announcement on Dec. 3 about the risk of default, saying that it might be unable to fulfill the guaranteed obligation of $260 million debt. Later that day, the Guangdong provincial office said on its official site that it reached a consensus with Xu for establishing a working group to resolve the debts.

On Dec. 6, Evergrande declared a risk resolution committee, not subordinate to the Board, had been set up in the company to meet “operational and financial challenges.” According to the declaration, the committee’s chairman is Xu, its members comprise corporate executives or professionals from Guangdong Holdings, a state-owned company in Guangdong Province; Yuexiu Group, an enterprise controlled by the Guangzhou Municipal authority; China Cinda, the first financial asset management company approved by China’s State Council, and Guosen Securities, a state-owned financial company in Shenzhen; and Zhong Lun Law Firm, a Beijing based multinational law firm.