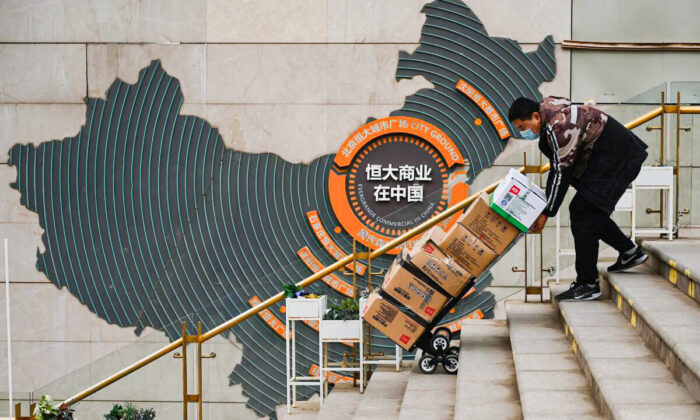 A worker pushes a cart in front of a sign showing Evergrande Group's China operation at a housing complex by the property developer in Beijing on Dec. 8, 2021. (Noel Celis/AFP via Getty Images)
China Business & Economy

Shares of China Evergrande Group tumbled on Jan. 27, a day after the debt-saddled developer announced a six-month preliminary restructuring proposal in a bid to quell its uneasy bondholders.

Evergrande, wrestling with liabilities of over $300 billion at home and aboard, “will continue to listen carefully to the opinions and suggestions of the creditors,” Chairman Hui Ka Yan said in a Jan. 26 filing (pdf) to the Hong Kong Stock Exchange. “It aims to come up with a preliminary restructuring proposal in the next six months,” the filing reads.

Earlier that day, executives told creditors in a long-awaited call that the company hoped to work with them to achieve a risk management solution.

The latest moves hardly pleased investors as the company’s shares dropped as much as 9.6 percent on Jan. 27 to a nearly two-week low to HK$1.70 ($0.2182). That compared to a 2.6 percent drop in the benchmark Hang Seng Index and a 3.2 percent decline in the Hang Seng Mainland Properties Index by noon.

Although promising the opposite, the deeply-indebted developer came under fire for alleged lack of urgency and effectual engagement with bondholders for months. Last week, a group of international bondholders threatened to roll out “all necessary actions” to defend their rights if the troubled developer fails to resolve its default in good faith.

The company sold 117.7 million shares, representing 5.6 percent of enlarged capital, for debt repayment and working capital, it said in a filing.