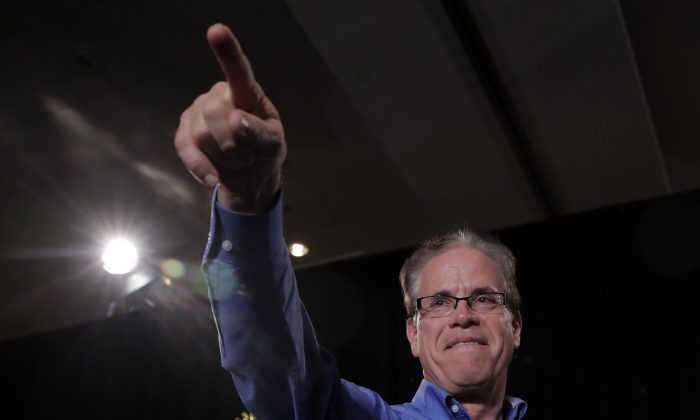 WASHINGTON—Republican Sens. Mike Braun and Todd Young of Indiana are both in their first terms as members of the U.S. Senate, while Rep. Kevin Brady (R-Texas) first came to the House of Representatives in 1997.

Two Indiana rookies and a grizzled Lone Star State veteran may seem like an unlikely team, but the trio thinks they have the solution to the relentless federal spending, deficit, and national debt problems their party has promised for decades to fix.

They call it the “Maximizing America’s Prosperity Act” (MAP), which caps federal expenditures at 17.5 percent of the nation’s projected Gross Domestic Product (GDP) by 2030. Identical versions of the bill were introduced into the House and Senate on July 24.

“Projected” GDP is a calculation of what the total value of all goods and service would be “if the economy were at full employment, not exceeding the employment level at which inflation would accelerate,” according to the bill text.

Currently, the federal government spends 20.3 percent of the potential GDP annually, according to Braun’s staff. The bill is similar to the “debt brake” approach that Switzerland used successfully to control expenditures beginning in 2003.

The MAP Act may prove to be the latest of many failed efforts by Congress—usually but not always while under Republican majorities—to rein in Uncle Sam’s out-of-control spending and debt.

Congress approved the Congressional Budget Act of 1974 in the hope of getting federal spending and deficits under control, but by 1985, it became clear things weren’t improving.

So Congress approved the Balanced Budget and Emergency Deficit Control Act of 1985, also known as the “Gramm-Rudman-Hollings” (GRH) bill, after Rep. Phil Gramm (R-Texas), and Sens. Warren Rudman (R-N.H.) and Ernest Hollings (D-S.C.), who were its main backers.

There were automatic budget cuts—known as “sequesters”—in GRH that were supposed to keep spending under control and, over time, end annual budget deficits.

Despite multiple amendments in succeeding years, including the 1990 Budget Enforcement Act and the 1997 Balanced Budget Act, spending, deficits, and debt mostly continued to go up.

Not even a 1993 proposal introduced by Rep. Tim Penny (D-Minn.) and Rep. John Kasich (R-Ohio) that targeted just “a penny of every dollar” succeeded, falling four votes short in the House.

Spending caps enacted in 2011 following the Tea Party election of 2010, like those in prior years, have since been revised upward, or even ignored.

The bottom line is federal spending in fiscal year 2019 is expected to be more than $4.5 trillion annually, with the annual deficit knocking down the door on $1 trillion and the national debt soaring beyond $22 trillion.

A new budget deal that passed the House on July 25 is now in the Senate, where it will likely be approved before the upper chamber leaves for the August recess.

The new deal, which President Donald Trump supports, boosts defense spending but also adds an estimated $1.7 trillion to the debt over the next decade and suspends the national debt ceiling for two years, so passage isn’t assured.

Whatever happens with the latest budget deal, it has helped build support for the MAP Act even before its official introduction, according to Taxpayers Protection Alliance President David Williams.

Williams is part of a virtual all-star lineup of conservative and libertarian think-tank and advocacy-group heavyweights backing the MAP Act.

Other members of the coalition include Grover Norquist of the Americans for Tax Reform; Tom Schatz, head of the Council for Citizens Against Government Waste; Phil Kerpen, president of American Commitment; Pete Sepp, president of National Taxpayers Union; and Tim Chapman of Heritage Action, among others.

“We were really upset last week with the budget compromise, I mean that was kind of a kick to the teeth,” Williams told The Epoch Times on July 30.

“So we’re looking for, really, anything to continue the discussion about the spending problem that we have, because that’s what this is. It’s a spending problem,” he said.

“Looking at the MAP Act, a couple of things jumped out at us. First, it’s a spending cap, which is moving in the right direction. And second, what I find really interesting is the emergency spending where we set aside 1 percent of the budget each year for emergencies,” Williams said.

Coalition members think the MAP Act can succeed where previous budget control efforts failed, so they are looking at a long-haul battle.

“It takes a long time to accomplish fundamental, structural reform, especially of as vexing a problem as excessive government spending,” Kerpen told The Epoch Times.

“If enacted, MAP would be sustainable where previous budget control efforts have failed, because it is designed to withstand economic downturns by using potential GDP and emergencies by budgeting a contingency fund,” Kerpen said.

“It might not pass any time soon, but it’s worth supporting and advancing,” he said.