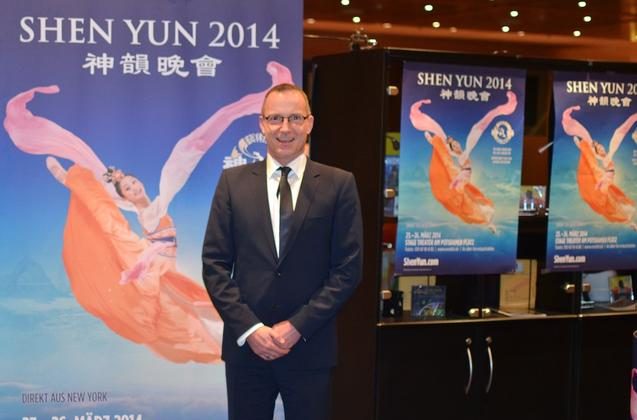 Event Manager: ‘We enjoy hosting events, especially one that is as beautiful as this event’

BERLIN—Jorg Seefeld, the event manager for the Stage Theater am Potsdamer Platz, attended the Tuesday night Shen Yun Performing Arts performance there. It is, with 1,800 seats, one of the largest theaters in Germany. The theater opened its doors in 1999, where the Berlin Wall stood.

Mr. Jorg Seefeld was named by the Berlin media for having stood up to the Chinese Embassy representative. The Berlin Kurier stated on Friday, March 21, “In Berlin art is dragged into politics. The Chinese Communist Party (CCP) tried to stop a dance performance.”

It continued, “The culture counselor of the embassy, Cheng Ping, was ,intervened in person … He demanded that the contract with the Shen Yun Company be cancelled, in turn, China would rent the venue with dance companies that were ‘politically acceptable’.”

Mr. Seefeld, after watching Shen Yun’s performance, said that they would never succumb to pressure from the Chinese embassy representative: “This was not because of the Shen Yun performance, but because we are a free country. We had a contract with the organizer of Shen Yun, and we definitely won’t break a contract.”

He explained that such an action “would harm our reputation … We enjoy hosting events, especially one that is as beautiful as this event.”

He continued to say that Shen Yun’s performance “was fantastic, sensational and absolutely worth seeing. I truly loved the show, the vibrant colors, the synchronization and the dancers. Everything was really professional.”

“The show was better than I expected. This is not to say that I didn’t enjoy the video, but when seeing it live, it is something totally different … I loved the costumes and the dances. I found that amazing.”

Speaking of the orchestra, according to a playbill handed out at one theater, “Shen Yun’s one-of-a-kind orchestra, with its all-original compositions, blends East and West like no other. The distinctly Chinese sound of ancient instruments like the erhu and the pipa are bathed in a rich sea of Western strings, percussion, woodwinds, and brass.“

Concerning the orchestra, Mr. Seefeld said, “The composition of the orchestra was great. To combine Chinese instruments with modern instruments, if we may call them modern, is totally different from what one hears when the ensemble is a band.”

Mr. Seefeld enjoyed the performance and will recommend it to others. He will tell people that they definitely should go and see it. “Especially since these are the last days for the show being presented in Berlin and one doesn’t know how long it will take before the show comes back. Perhaps the Shen Yun company will return next year and also one might be able to see it in another German town, or in a German speaking neighboring country.”

“Snap the chance to see this show. It is the best. Make sure that you have a seat!”

Reporting by Florian Godovits and Heide B. Malhotra