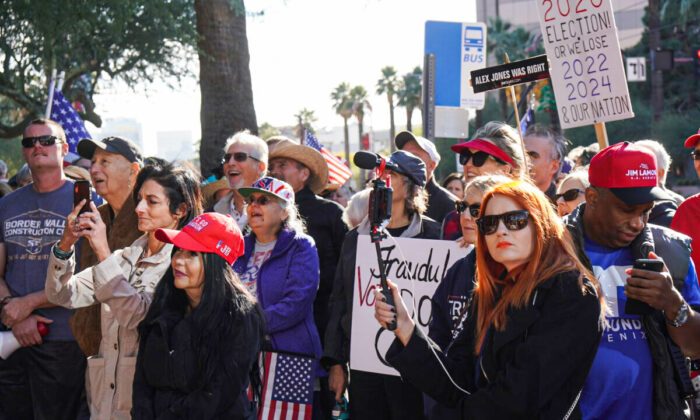 Election integrity remains a key issue among voters going into 2022. A Rasmussen Reports national survey in July found that 52 percent of likely U.S. voters believe it is at least somewhat likely that cheating affected the outcome of the 2020 presidential election, while 50 percent think it is at least somewhat likely there will be widespread cheating that will affect the outcome of the midterm elections.

Those sentiments have been fortified with continuing reports of election integrity problems in Georgia, Arizona, Wisconsin, Colorado, and Pennsylvania, as well as the documentary “2000 Mules” that was produced by True The Vote, a national organization whose mission is “to train citizens to protect election integrity at the polls, and to help protect all voters’ rights.”

Much of the recent reporting on election integrity is the result of volunteer citizens groups in the various states conducting their own investigations, as well as the canvassing of voters in their counties and states to verify voter registration rolls and that votes counted during the primary, general, and special elections were cast by authorized voters. One such organization in South Dakota has recently completed and compiled election integrity-related statistics from the November 2020 general election.

A citizens volunteer organization, South Dakota Canvassing Group, has presented its analysis of the 2020 elections to the South Dakota Secretary of State (SoS) and county auditors for the purpose of stimulating action to update the voter rolls before the November midterm election by removing voters who are deceased, moved to another location, or been inactive for two general elections.

Here are some of the findings from its analysis.

While the election was certified on Nov. 10, 2020, the official SoS website showed the total votes cast shifting upwards and downwards at periodic times through Dec. 29, 2021. In addition, the official tabulation posted on April 2, 2021, showed a peculiar discrepancy: 427,529 ballots were cast in the state while 422,609 ballots were reported to have been cast by county.

While voter registration ended on Oct. 19, 2020, which was 15 days before the election in accordance with South Dakota law, registration analysis resulted in the identification of the following discrepancies:

An analysis of official voter rolls from the election that were revised and updated on Dec. 28, 2021, resulted in the identification of the following discrepancies:

The following statistics were collected that indicated potential problems. Of the 10,388 votes recorded from five different mail-forwarding companies:

Were all of these people at these various out-of-state addresses really authorized voters?

South Dakota Canvassing also conducted door-to-door voter canvassing in the three largest counties by population in the state—Minnehaha, Lincoln, and Pennington—on Feb. 5 and on Mar. 15. The following discrepancies were noted:

Lastly, the following information was provided relating to South Dakota’s use of absentee ballot drop boxes during the 2020 general election:

South Dakota is a relatively small state with just over 901,000 residents. Its relatively small size makes the task of managing elections considerably easier than in large states like California, New York, and Florida. Even so, it is clear that South Dakota has some work to do on election integrity.

What might a citizens canvassing group find in your state?