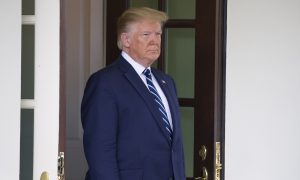 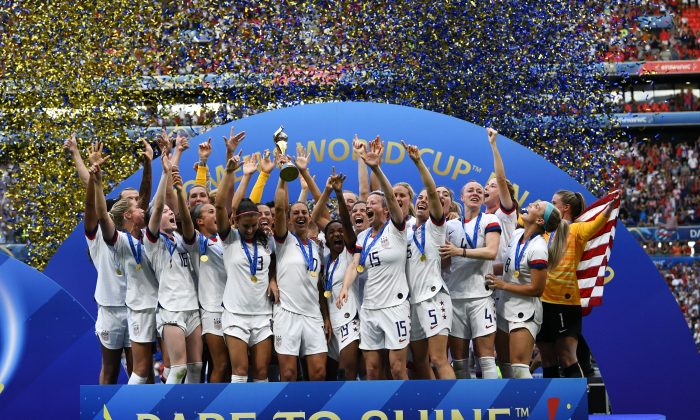 USA's players celebrate with the trophy after the France 2019 Womens World Cup football final match between USA and the Netherlands, on July 7, 2019, at the Lyon Stadium in Lyon, central-eastern France. (FRANCK FIFE/AFP/Getty Images)
Viewpoints

Even in Victory, US Women’s Soccer Team Has Embarrassed Nation

The U.S. women’s soccer team is loaded with talent. Its victory over the Netherlands on July 7 means the United States is back-to-back World Cup champions, which is greatly impressive.

Sadly, however, the conduct of several players on and off the field has cast a cloud over the team’s achievement and has embarrassed the United States on the world stage.

Numerous incidents have deflected our attention away from the team’s play on the field. First, the team was correctly criticized for “celebrating” too much during a 13–0 crushing defeat of Thailand, which reflected a lack of class. Additionally, Megan Rapinoe, the team captain, has refused to put her hand over her heart or sing the national anthem before each game, in protest of the president’s alleged policies. In doing so, Rapinoe has also repeatedly and publicly disparaged the president.

Rapinoe’s teammate, Ali Krieger, defended her in a tweet, stating:

“In regards to the ‘President’s’ tweet today, I know women who you cannot control or grope anger you, but I stand by @mPinoe & will sit this one out as well. I don’t support his administration nor their fight against LGBTQ+ citizens, immigrants & our most vulnerable.”

“We don’t have to be put in this little box. There’s the narrative that’s been said hundreds of times about any sort of athlete who’s spoken out politically. ‘Stick to sports.’ We’re much more than that, OK?”

While Morgan got “political,” she was also criticized by many, including former English soccer players, for pretending to sip tea after scoring a goal against England. This celebratory act was perceived by some as mocking England, given that country’s love of the beverage.

These incidents have cast a cloud over the U.S. Women’s soccer team and have embarrassed the nation. While these women might believe they are showing their individuality or standing up for women’s rights, they are sorely mistaken.

When Rapinoe was asked about the criticism toward Morgan, she responded by saying “Wah, wah, wah,” according to Fox News. Rapinoe said, “We work hard, we like to play hard, and we like to have fun and enjoy ourselves and these are the absolute biggest moments to do that.”

Wrong! Acting like belligerent children on the world stage doesn’t constitute “having fun.” Criticizing the president of the United States while playing for the U.S. team in the World Cup tournament doesn’t make you more of an “independent woman.” Finally, ridiculing a rival team and country after scoring a goal does not keep things “interesting.” Rather, it’s disrespectful and doesn’t belong on the field.

The conduct of these players has, unfortunately, hurt the entire team in the court of public opinion. Sadly, while many Americans traditionally want to cheer for U.S. teams during various sports tournaments, the conduct of some on this team has made it difficult to do so.

The trouble with this team, in part, relates to public perception—that the team lacks class and dignity. While some of the more vocal players on the team have tried to justify their conduct and statements in the name of “fun,” “fighting against a double standard,” or an athlete’s right to talk about more than sports, these reasons simply don’t pass muster.

The World Cup tournament is about soccer! It’s not a time to criticize your president or to shame your country. On the contrary, it’s about representing your country with pride and with dignity.

Most of the other participating countries in the tournament did this. Sadly, some on the U.S. squad did not.