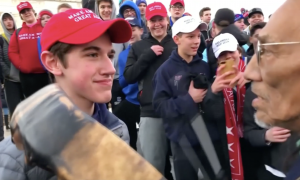 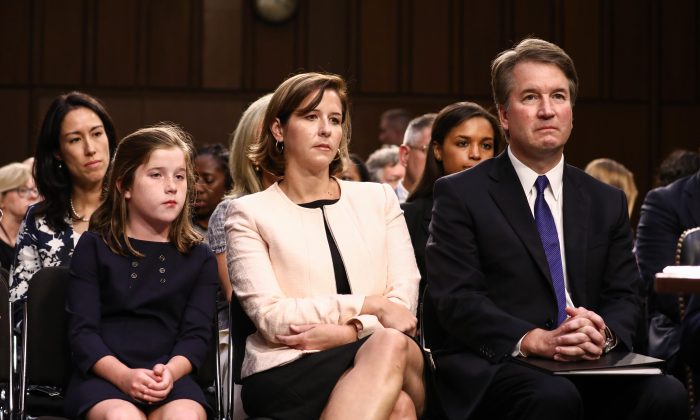 Judge Brett Kavanaugh sits next to his wife Ashley Kavanaugh, and daughter Liza, before the Senate Judiciary Committee during the first day of his confirmation hearing to serve as Associate Justice on the U.S. Supreme Court at the Capitol in Washington on Sept. 4, 2018. (Samira Bouaou/The Epoch Times)
Viewpoints

Even in the Days of ‘Fake News,’ a Public Figure Faces Uphill Battle in Potential Defamation Lawsuit

The New York Times recently published an article that included a new allegation of sexual misconduct against Justice Brett Kavanaugh.

The allegations against Kavanaugh were uncorroborated and disputed, yet the NY Times published the piece, despite the impact that it would potentially have on Kavanaugh, his family, Congress, and the Supreme Court.

Sadly, there have been too many recent instances where the accuracy of one or more reports has been seriously questioned or undermined. This has resulted in many erroneous stories that have hurt or vilified people, prompting calls for legal action, including, but not limited to, defamation. As unfortunate as this is, when it comes to public officials like Kavanaugh, claims for defamation are more difficult because of the applicable legal standard.

The most recent alleged incident involving Kavanaugh is the latest in a string of so-called “blockbuster” stories. According to the NY Times article, Max Stier, one of Kavanaugh’s Yale classmates, claims he saw Kavanaugh engage in inappropriate sexual behavior with a female student at a dorm party. However, the female student who was allegedly victimized by Kavanaugh doesn’t remember the alleged event. This fact was initially left out of the original NY Times story.

According to John McCormack, the National Review’s Washington correspondent, “Omitting these facts from the @nytimes story is one of worst cases of journalistic malpractice that I can recall.”

The NY Times has since updated the original story, which was based on a book excerpt, and added an “editors’ note” stating in part, “The book reports that the female student declined to be interviewed and friends say that she does not recall the incident. That information has been added to the article.”

This, sadly, is not the first time that the press has maligned and tarnished Kavanaugh, as some all but convicted Kavanaugh during his confirmation process despite the absence of any corroborating evidence.

In light of the barrage of uncorroborated and false allegations against Kavanaugh, some, including the president, have suggested that he pursue legal action as a result of these false statements. However, as a public official, if Kavanaugh ever decided to pursue a defamation or libel case, he would face a high and difficult legal standard.

In the case of New York Times Co. v. Sullivan, the Supreme Court unanimously ruled that the First Amendment “protects newspapers even when they print false statements, as long as the newspapers did not act with ‘actual malice.’”

Specifically, according to the Bill of Rights Institute:

“In order to prove libel, a ‘public official’ must show that the newspaper acted ‘with “actual malice”–that is, with knowledge that it was false or with reckless disregard’ for truth. The Court asserted America’s ‘profound national commitment to the principle that debate on public issues should be uninhibited, robust, and wide-open.’ Free and open debate about the conduct of public officials, the Court reasoned, was more important than occasional, honest factual errors that might hurt or damage officials’ reputations.”

In other words, the Supreme Court ruled that in order for a public official to prevail in a libel suit, the public official had to show that the paper acted with actual malice. While this is difficult to prove, the court indicated that it could be established with proof that the paper acted with reckless disregard for the truth. The court also noted, however, that a “rule compelling the critic of official conduct to guarantee the truth of all his factual assertions—and to do so on pain of libel judgments virtually unlimited in amount—leads to a comparable ‘self-censorship.'”

In the case of the recent NY Times article, one possible question that could arise is whether the NY Times acted with reckless disregard for the truth by publishing an article regarding Kavanaugh’s alleged improper sexual conduct when the information wasn’t only uncorroborated but also not recalled by the alleged victim?

This would make for an interesting, yet difficult, legal question that a court would ultimately have to decide. The other obvious question is whether Kavanaugh would want to keep these uncorroborated allegations in the spotlight and go through the discovery process by virtue of filing suit, or whether he would prefer to let things quiet down on their own. Given the nature of the allegations, this isn’t an easy decision.