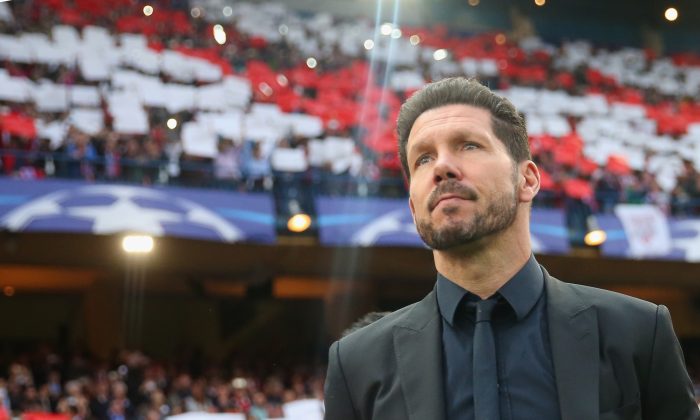 Even in Defeat, ‘Cholo’ Simeone Is Among the Best

Despite losing its final game against Real Madrid, the Atlético de Madrid team has a hero: Diego “El Cholo” Simeone, one of the most unconventional soccer managers in the world. Few managers have his same drive for success or his capacity for motivating his players to give all their efforts for their team. His motto was: “Work, work, work.”

Simeone was already remarkable as a soccer player. He was a tenacious midfielder, who could win impossible balls and start attacking moves, even scoring goals himself. He represented Argentina at the 1994, 1998, and 2002 FIFA World Cups. The characteristics that he had as a player: technique, versatility, intelligence, strength, and stamina served him well when he became a manager.

His nickname “Cholo,” as he is generally known, was given to him by his youth coach Victorio Spinetto, who called him that way because it reminded him of the energetic style of a former Boca Juniors players and Argentine international Carmelo Simeone, who was no relation of his.

No genteel player, Simeone himself described once his playing style as “holding a knife between his teeth.” During the 1998 World Cup, in the match between England and Argentina, Simeone reacted theatrically to a kick by David Beckham. As a result, Beckham was sent off the field.

Simeone’s behavior was widely criticized. Sports Illustrated stated that Simeone had first delivered a “heavy-handed challenge” on Beckham and then “fell like a ton of bricks” when Beckham retaliated. Simeone later admitted that he had simulated an injury from Beckham’s kick in order to have him sent off.

During a friendly game between Argentina and England at Wembley, Siemone’s father was watching the game with a friend of his. Every time that Cholo was playing near where his father was seating, his father whistled at him to call his attention to something in the game. After several of his father’s calls Simeone couldn’t stand it any longer and yelled at his father, “Stop, dad, you are driving me nuts!”

On Dec. 23, 2011, Simeone was named the Atlético de Madrid coach. He succeeded Gregorio Manzano, who had been dismissed the day before. In his first season as a coach, Atlético de Madrid won the UEFA Europe League after beating Athletic Bilbao 3-0 in the final game in Bucharest.

In the final for the Champions Cup, Simeone adapted himself to the players in his team. Several times he said that a team that played as a collective can beat any other team. And after a lackluster beginning, Atlético de Madrid recovered and was able to tie the game and the final result had to be decided on penalty shots.

Simeone has the reputation of making good of bad situations. “Simeone taught us to enjoy suffering,” said Arda Turan, the Turkish player, during his stay at Atlético de Madrid.

If not suffering, it was clear that Simeone believes in hard work and passion. Atlético de Madrid lost its final game on penalty kicks. It was an inglorious ending for the team that in no way diminishes Simeone’s considerable accomplishment.

Other than an Argentine soccer fan, César Chelala, M.D., Ph.D., is a global public health consultant for several U.N. and other international agencies. He has carried out health-related missions in 50 countries worldwide. He lives in New York and writes extensively on human rights and foreign policy issues, and is the recipient of awards from Overseas Press Club of America, ADEPA, and Chaski, and recently received the Cedar of Lebanon Gold Medal. He is also the author of several U.N. official publications on health issues.