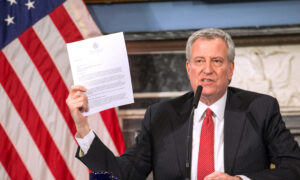 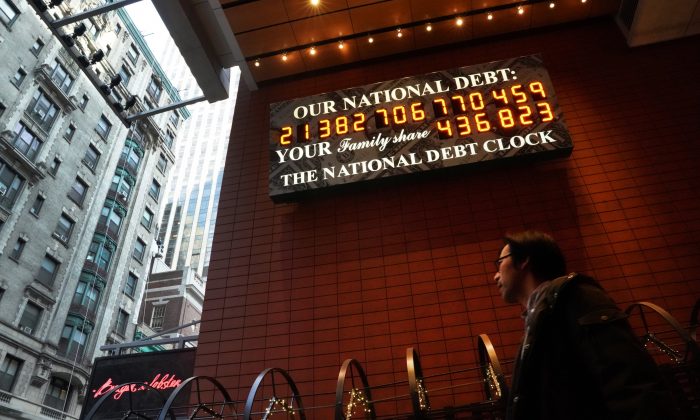 A man walks past the National Debt Clock on 43rd Street in midtown Manhattan on Feb. 15, 2019. (TIMOTHY A. CLARY/AFP/Getty Images)
Policy

Even Before $2 Trillion-Plus in CCP Virus Recovery Costs, US Finances Looked Grim

Federal officials representing both major political parties in the United States added more than $8 trillion on the wrong side of the country’s financial ledger in 2019, according to a Chicago-based accounting foundation’s analysis.

The federal government’s “overall financial condition worsened by $8.16 trillion in 2019,” Truth in Accounting (TIA) stated in its latest “Financial State of the Union” annual report. Nearly $7 trillion of the increase is due to unfunded Social Security and Medicare benefits.

“Our elected officials have made repeated financial decisions that have left the federal government with a debt burden of $113.27 trillion, including unfunded Social Security and Medicare promises,” the report stated.

“That equates to a $737,000 burden for every federal taxpayer. Because the federal government would need a vast amount of money from taxpayers, it has received an ‘F’ grade from Truth in Accounting.”

Unlike the annual financial statement prepared by the Department of Treasury, the TIA report looks at net federal assets versus net operational costs and liabilities in the current year and those promised for the future, mainly under Social Security and Medicare.

“While most people focus on the annual budget deficit of $984 billion, the overall decline in net position presents a better picture of the government’s financial decline,” the TIA report stated.

“The Treasury Department only includes $173.70 billion of Social Security and Medicare liabilities on the federal balance sheet because, according to government documents, recipients do not have the right to benefits beyond the benefits currently due, and laws to reduce or stop benefits can be passed at any time.”

The value of all the federal government’s assets is $3.99 trillion. That means for every $1 trillion in assets controlled by the U.S. government, it must fund nearly $30 trillion in debt and promised benefits.

The $3.99 trillion in assets includes the value of the 640 million acres of U.S. land that are currently owned by the federal government, TIA founder and CEO Sheila Weinberg told The Epoch Times on April 7.

Federally-owned properties represent 28 percent of the country’s total land area, according to the Congressional Research Service (CRS). The federal government spends nearly $20 billion annually maintaining its lands, which are mainly in Alaska and 11 Western states.

Asked by The Epoch Times how the government can fund so massive an imbalance between assets and obligations, Weinberg wasn’t optimistic.

“To repay debt, the U.S. government would have to run true surpluses, but instead, even before the current crisis, we were expected to run $1 trillion yearly deficits as far as the eye could see,” she said.

“History has shown that every few years, there is a crisis, like World War I, the Great Depression, World War II, the 9/11 terrorist attacks, the 2007 housing market crisis, plus earthquakes, floods, hurricanes.”

The United States has traditionally relied on bonds to generate funds needed to repay debt, but Weinberg said the government should instead accumulate asset reserves.

“Instead of planning for these crises by having reserves, we sell bonds, and the debt continues to climb. How long will the U.S. government be able to continue to borrow? It is scary to think about when the lending market says ‘enough,’ and we can’t borrow,” she said.

Weinberg cited the Greek financial crisis in 2010 as a warning to U.S. policymakers of the dire consequences of running large deficits and accumulating massive long-term debt.

She pointed to a 2015 analysis by TIA Research Director Bill Bergman that identified six key factors in the Greek crisis that resulted in massive anti-government demonstrations, dramatic cuts in government-funded benefits, and loss of critical public services.

The most significant of the six factors was a long period of what Bergman described as “accounting chicanery,” with debts and deficits being systematically underreported by officials.

“The main factors leading to the crisis are linked by the manipulation of accounting reports used in the governance of Greece’s participation in the Eurozone,” Bergman wrote.

“Accounting chicanery helped grease the wheels for Greece’s unsustainable growth in the 2000s, and the unmasking of that charade led to the outsized exposure of Greece to the Great Recession of the late 2000s internationally,” he wrote.

“I think we check all of those boxes,” Weinberg said.