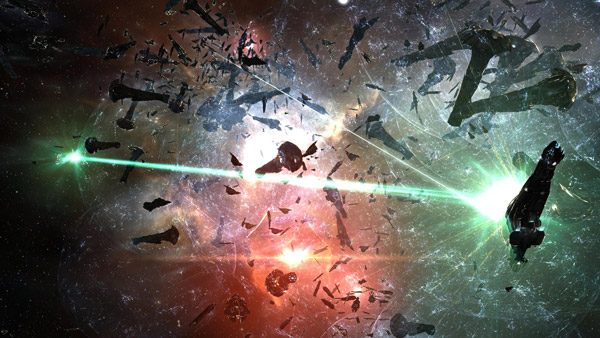 The massive battle in EVE Online, named B-R5RB, decimated thousands of fighters and cost hundreds of thousands of dollars.

The final tally of the battle–which began after a missed payment on a supply area and was described by the development team as “the largest, most destructive battle in gaming history”–has been revealed.

The missed payment was particularly damaging because it was for a staging system for all of the Pandemic Legion fleets in one of the largest wars, The Halloween War, ever to be waged in EVE Online.

The missed payment set off the huge battle between the Pandemic Legion and N3 versus CFC and Russian forces. The former sent in much of their capital and super-capital forces to try to secure the station, while CFC and Russian forces seized the opportunity to deploy the entire Capital Fleet.

“Unlike nearly every other large scale super-capital engagement up till this point, both sides thought they could win,” EVE Online development team said. “They continued trying to get every single pilot into system with the most powerful warships they could bring to bear. After a few hours, the field was being lit up by doomsdays and the glittering hulls of hundreds of Titans and Supercarriers and thousands of Dreadnaughts and Carriers and smaller ships.”

A look at in-game action. Each red or orange dot is either a ship or a drone. (All photos/EVE Online)

The fight will be commemorated for an in-game monument.

It has been created using brand new Titan wreck models. It will be placed around the seventh planet in the B-R5RB solar system and be “off grid” from the station.

“Thereafter, any player who plays EVE can make the dangerous pilgrimage there and marvel at the scope of destruction,” the development team said. “We expect some of the ‘travel’ bloggers to do full write-ups on it almost immediately and EVE videographers to make some moving tributes as well.”

The installation is expected to be completed today, January 31.