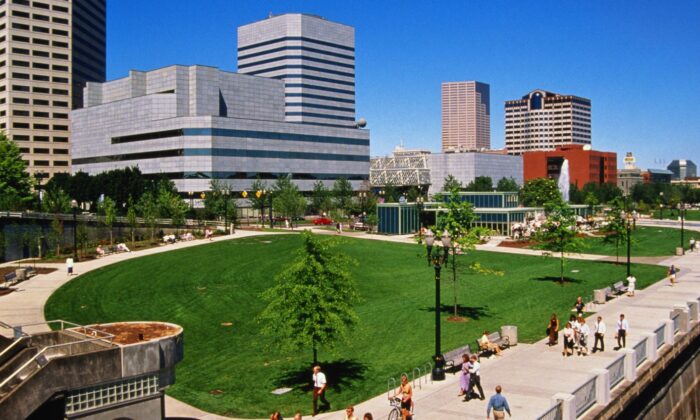 Mark Mayberry, an anti-abortion activist, is seeking legal action against the city of Portland, Oregon, for violations of his religious rights and freedom of speech.

In June, Mayberry was in Tom McCall Waterfront Park, where he was displaying a sign defending the unborn, passing out related tracts, and talking to people about abortion and its relation to Christianity.

A park ranger approached Mayberry and asked him to leave the property. Mayberry refused, which resulted in a citation and ban from entering the park for 30 days.

Ray Burke, an attorney at Pacific Justice Institute (PJI) representing Mayberry, told The Epoch Times that Mayberry often goes to public parks and attends fairs and events around the city to engage in conversation with people and to share the Gospel.

However, during their interaction at the park, the park ranger accused Mayberry of harassment and for not obeying “reasonable” orders from a park officer when asked to leave the property.

Burke noted that “the Portland city code says that we only have to obey reasonable orders, and if somebody is at a park engaging in free speech and an officer tells them to stop, by the code’s own language, that is not a reasonable order. And so Mr. Mayberry was not obligated to obey it, and he didn’t.”

According to Burke, the interaction was peaceful, and there was no physical confrontation.

The issue was taken to the city for a hearing. During the city hearing, the city auditor determined that the ban and citation were unconstitutional, overturning the citation and ban.

The Oregonian reported that Hearings Officer William Guzman wrote in his ruling that “the Park Officer’s direction to stop engaging passersby with information regarding his Christian beliefs against abortion was not reasonable. Appellant was not required to comply with this park officer’s unconstitutional attempts to silence Appellant’s message.”

Guzman determined that Mayberry’s activities and behavior at the park were protected under the First Amendment.

Burke said that while Mayberry is grateful for his vindication before the city auditor, Mayberry isn’t content and wants to send a message to the city of Portland regarding its history of violating free speech and religious rights.

In October, PJI filed suit under the federal 1964 Civil Rights Act. The lawsuit will seek more than $300,000 in damages and aims to send the message to Portland that people won’t continue tolerating infringements on their freedom of speech and religion.

Both Tracy Reeve, the city attorney, and Mark Ross, spokesman for Portland’s parks and recreation department, declined to comment on the case.

Burke said this isn’t the first time the city of Portland faced legal cases pertaining to freedom of speech and religion.

“Portland has a reputation for, basically, cracking down on street preachers,” said Burke. “Mr. Mayberry is not the first street preacher I’ve represented, you know, who has had problems with Portland police or other law enforcement officers relating to sharing the Gospel.”

Although not everyone may agree with Mayberry’s beliefs, the freedom of speech and religion are protected rights, and as long as those rights are exercised peacefully, a city or state cannot obstruct those rights, he said.

“With this case, we’re basically trying to send the message to the city of Portland that, no, this will not happen again. People have free speech rights, and they also have religious rights, and you [Portland] will not trample on them [rights],” Burke said.

The First and Fourteenth Amendments of the U.S. Constitution, together, protect people’s freedom of speech and religion, and states are prohibited from abridging those rights.

“The city of Portland already had prior notice that individuals like our client have a right to show their faith in public places,” PJI President Brad Dacus said.

“They [Portland] already had an injunction against them for, in the past, not respecting the rights of people like our client. So, the fact that they continue to do so in violation of it on a court order injunction makes this case very right and necessary for a civil lawsuit.”