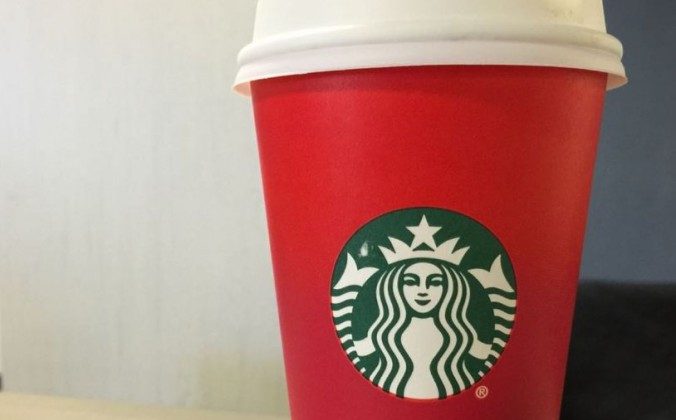 The Epoch Times
US

There’s been controversy over Starbucks’ new red cups. But now, in one viral Facebook video, Joshua Feuerstein came up with a plan to get workers at the chain to get them to say “Merry Christmas.”

The design no longer includes the words “Merry Christmas” or holiday-themed things like trees, ornaments, or snowflakes. It’s just a minimalist red. However, a number of people said the cups were a subtle attempt to take Christianity out of the holiday season.

“I think in the age of political correctness we become so open-minded our brains have literally fallen out of our head,” Feuerstein, an Arizona-based evangelist, said in the video rant.

Starbucks REMOVED CHRISTMAS from their cups because they hate Jesus … SO I PRANKED THEM … and they HATE IT!!!! #shareUse #MERRYCHRISTMASSTARBUCKSFollow –> Joshua Feuerstein

“I went in,” he said in the video. “I asked for my coffee. They asked for my name. And I told them my name is ‘Merry Christmas.’ “

“Guess what, Starbucks?” Feuerstein added. “I tricked you into putting ‘Merry Christmas’ on your cup.”

He called on other people to also post “coffee selfies.”

Some people said Feuerstein’s post is a bit misguided.

The Starbucks Christmas cups thing is hilariously stupid. People are freaking out over cups. Cups… #MerryChristmasStarbucks

However, many people embraced his message.

“It’s not just about a cup,” he told the Washington Post. “The cup is symbolic of a larger war against Christianity in this country. The policemen of political correctness have demanded that the silent majority bend its knee to a vocal minority.” He said, “Starbucks and others know that Americans are drawing a line in the sand and refusing to remain silent any longer.”

The company issued a press release about the backlash over its new cups.

“Creating a culture of belonging, inclusion and diversity is one of the core values of Starbucks, and each year during the holidays the company aims to bring customers an experience that inspires the spirit of the season,” the company said in the press release. “Starbucks will continue to embrace and welcome customers from all backgrounds and religions in our stores around the world.”