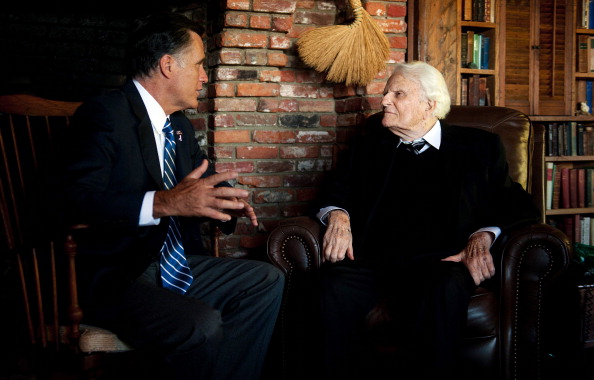 US Republican presidential candidate Mitt Romney (L) speaks with the Rev. Billy Graham during a visit to the Graham cabin in Montreat, N.C., on Oct. 11, 2012. (Jim Watson/AFP/Getty Images)
US News

Billy Graham, known for counseling presidents and reaching millions of people, has died at age 99.

Graham had long been suffering from cancer, pneumonia, and other ailments.

He died on Wednesday morning at his home in North Carolina.

Graham is credited with bringing evangelical Christianity into the mainstream, reported ABC News.

He also had access to the White House as spiritual adviser to many presidents, including Dwight Eisenhower, Richard Nixon, and Ronald Reagan.

Billy Graham passed away this morning at his Montreat, North Carolina, home and met his Savior, Jesus Christ. Mr. Graham was 99. For more visit: https://t.co/BqTSDigeaT

The GREAT Billy Graham is dead. There was nobody like him! He will be missed by Christians and all religions. A very special man.

“(When I’m gone) I want to hear 1 person say something nice about me…& that’s the Lord—‘Well done, good & faithful servant!’”
-Billy Graham
Billy heard those words this morning & so will 3 million others b/c of his life

“Each one I’ve known long before they ever became president, been in their homes many times; always called them by their first names, until they became president,” Graham said of several former presidents.

However, in his later years, Graham kept his distance from the evangelical political movement he helped grow, reported The New York Times.

“If I get on these other subjects, it divides the audience on an issue that is not the issue I’m promoting,” he said in 2005. “I’m just promoting the Gospel.”