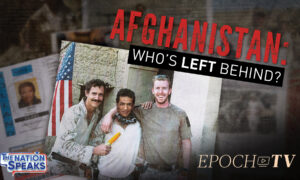 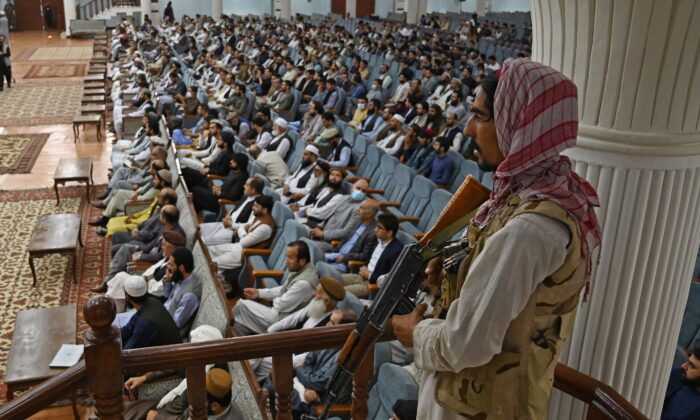 A Taliban fighter stands guard as the group's Higher Education Minister Abdul Baqi Haqqani speaks on the Taliban's higher education policies at the Loya Jirga Hall in Kabul on Aug. 29, 2021. Afghan women will be allowed to study at university but there will be a ban on mixed classes under Taliban rule, Haqqani said. (Aamir Qureshi/AFP via Getty Images)
Afghanistan

Taliban's promise of 'complete amnesty' a lie, he says
By Isabel van Brugen

The Taliban is gaining control over Kabul through threats and coercion, according to an Afghan citizen who has managed to flee his homeland before the terrorist group tracked down his address and paid a visit in search for him.

Just days after fleeing Afghanistan with his son and his wife on Aug. 24, Fawad, a PhD scholar who worked for the government prior to the Taliban takeover, told The Epoch Times that he had learned that a large group of Taliban members visited his home, demanding to know his whereabouts.

Meanwhile, Fawad said he knew of three other Afghans—one in a high-ranking position in the Afghan media—who had been detained and tortured by the Taliban for three days. He says they were all released after being forced to sign documents promising the terrorist group that they will not leave the country or make their detentions and torture public.

The account comes as growing evidence emerges of Taliban killings, detentions, threats, and intimidation, contradicting the terrorist group’s promises last month and in the Doha peace agreement not to retaliate against its opponents.

Speaking on condition on anonymity from a quarantine center in India on Monday, Fawad, who has authored some 200 articles in international journals and newspapers critical of the Taliban, said the terrorist group on Aug. 28 had interrogated a contractor guarding in his apartment building and demanded to see copies of his rental contract.

The Taliban members eventually left after learning that he had already been evacuated, he said.

“They took some information from that dealer and left because they weren’t able to find me. They took some pictures of the [rental] contract,” Fawad said in a phone interview, noting that the incident was witnessed and photographed by contacts who live nearby.

Fawad said that from what he’s heard about the Taliban’s behavior in recent days from friends in Kabul, the Taliban’s public promises of “complete amnesty” for those who have fought against them or worked for the government are no more than a front.

Enamullah Samangani, a representative of the Taliban’s cultural commission, said on Afghan state television on Aug. 17 that the group “has announced a complete amnesty for all Afghanistan, especially those who were with the opposition or supported the occupiers for years and recently.”

Fawad told The Epoch Times he believes he is being targeted by the Taliban for his affiliation with the government and his academic writing.

“Because of that, they came,” he said. “How they found my place and how they knew my name, I do not know.”

“They [the Taliban] are lying! Especially about those people who have written against them … they know who they’re targeting and searching [for],” Fawad added, pushing back against previous statements from the group that their fighters have been barred from entering private homes. It is unclear how strictly such commands are being followed by the rank and file of the Taliban, which is made up of a number of different factions.

The Taliban’s promises have also been undermined recently by a leaked report from the nonprofit RHIPTO Norwegian Centre for Global Analyses, which provides intelligence to the United Nations.

The report said that the Taliban terrorist group was carrying out highly organized door-to-door manhunts for people on their wanted list, threatening to kill or harm their relatives if they do not surrender.

Targets include people who have worked for or collaborated with American or other NATO forces, and former government employees, particularly those in intelligence services and the special forces units, according to the report, which warns of mass executions of those on the Taliban’s blacklist.

Illustrating the dangers highlighted in the report, the family member of a journalist for Deutsche Welle, a German broadcaster, was shot dead by Taliban fighters searching for the reporter last month.

Meanwhile, award-winning Afghan photographer Massoud Hossaini, who fled to the Netherlands on Aug. 15, told AFP that he had received numerous threats from the Taliban over his work. Hossaini warned that the Taliban is attempting to slowly “kill the media.”

Agreeing with Hossaini’s remarks, Fawad told The Epoch Times that he believes the Taliban terrorist group is “afraid” of a free press and academics who are able to “write the facts.” For this reason, they want to “control the media,” he added.

Television channel TOLO, for example, has changed its coverage dramatically since the Taliban seized control of Kabul on Aug. 15, he said, noting that music is no longer played, female anchors have been removed, and only religious programs and “controlled” news are being aired.

Elaborating on how the Taliban threatens and coerces individuals in their quest for control, Fawad explained that the terrorist group puts pressure on the family of targets who have fled, or are in hiding, in order to force their return and surrender to the Taliban.

“If he does not return and surrender, they will torture the family,” Fawad said.

But as the terrorist group now seeks to present an image to the outside world that it is less repressive, many remain doubtful it has changed its ways.

Lt. Col. Omar Hamada, M.D., a former U.S. Special Forces flight surgeon, told The Epoch Times he believes the “brutal” Taliban regime still wants to institute Sharia Law “under the threat of violence, and they’re not going to change that.”

“To think that they’re going to change color now, I mean, does a leopard lose its spots? Of course not … the Taliban isn’t all of a sudden going to be some peace-loving regime that’s going to let people live the way they want,” he said on Monday.

Hamada, now an emergency room doctor, also criticized the Biden adminstration after Secretary of State Antony Blinken and national security adviser Jake Sullivan confirmed that the United States shared with the Taliban a list of names for American citizens, green card holders, and Afghan allied personnel in an attempt to grant them entry to Kabul’s international airport.

“Even a high school student knows better than to hand our enemies a list of our assets and allies,” Hamada added. “It’s a target list … I think it’s a gift to the Taliban. These are the people who have been helping us, and I think it’s very naive for us to think that they’re going to use that for anything other than targeting them.”