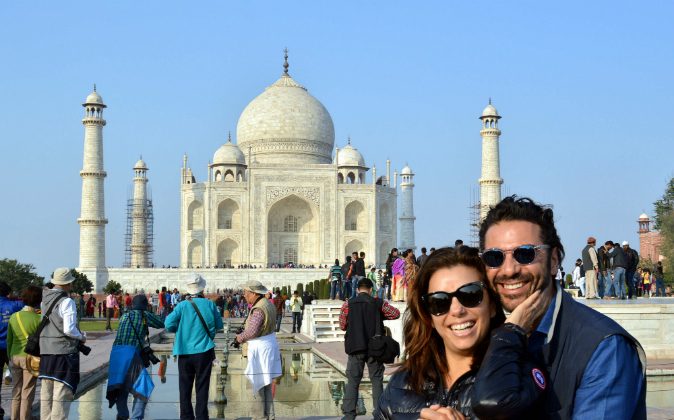 Eva Longoria and José Antonio Bastón are husband and wife.

The couple were married on May 21 in a sunset ceremony in Valle de Bravo, Mexico, among 80 family and friends that included Victoria Beckham—who designed Longoria’s wedding dress—Mario Lopez, and Ricky Martin.

“They married on an altar under lots of little lights,” the source told People. “It was very romantic. Eva wore her hair down and smiled during the whole ceremony. He was in a gray suit.”

The following day Longoria uploaded a photo from the wedding, showing the pair’s rings and two place cards that read “Jose Bastón” and “Eva Bastón.” She captioned the photo with, “In our garden, surrounded by a small gathering of people we love, Pepe and I tied the knot! #TalkAboutBlessed #ImStillFloating #OmgMyFeetHurt.”

In our garden, surrounded by a small gathering of people we love, Pepe and I tied the knot! #TalkAboutBlessed #ImStillFloating #OmgMyFeetHurt

According to Hola! USA, the couple “were married in a bilingual ceremony, officiated both English and Spanish by the ‘Father Pedro.” As for the couple’s first dance, the song of choice reflected their “Latin roots.”

This is the third marriage for the 41-year-old actress. She was previously married to NBA star Tony Parker from 2007 to 2010, and “General Hospital” star Tyler Christopher from 2002 to 2004. Bastón, president of Latin American media brand Televisa has three children from a previous relationship.

Longoria and Bastón began dating in 2013, and few years later in 2015 he proposed to the “Desperate Housewives” actress during a vacation in Dubai.

Longoria raved about her new love in an interview with People magazine.

“He was the most handsome man I’d ever seen. He was so charismatic, charming, sweet and funny. I thought, ‘Who is this guy?!’ ” she said.

She added, “I want to yell from the highest mountaintop about everything that goes on with us because I’m so happy and excited to be with a person as kind as Pepe is. He is probably one of the first men I’ve dated that has been older and established and, basically, a grown-up—It is so nice to be arm-in-arm with someone who is your equal.”

The couple are currently on honeymoon.