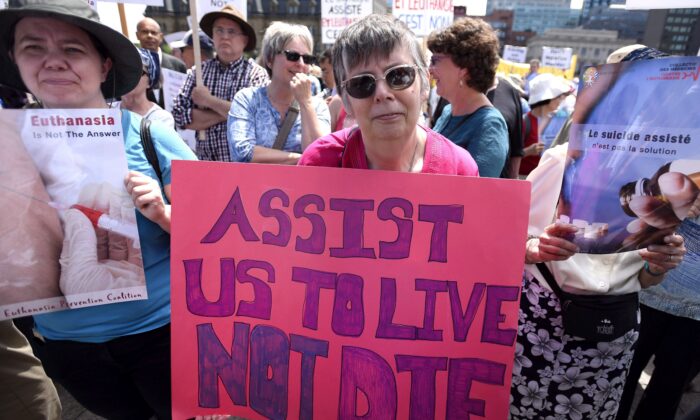 People rally against Bill C-14, the medically assisted dying bill, during a protest in Ottawa on June 1, 2016. Bill C-7, currently before the Senate, seeks to broaden the 2016 law on medical assistance in dying. (The Canadian Press/Justin Tang)
Viewpoints

Frederico Carboni made international news recently when he died in Italy’s first legal assisted suicide. Carboni was not terminally ill. He was paralyzed from an auto accident. He wanted suicide because he had no autonomy, saying in an interview, “I am like a boat adrift in the ocean.”

How tragic. Quadriplegia need not be the end of all good things. People who have experienced such catastrophic accidents often pick up the pieces and get on with life—when they receive life-affirming care and are not merely “warehoused” in a nursing home.

But too often people with disabilities are denied that compassion, which pushes them toward euthanasia or suicide out of desperation. One such woman is Rosie Ashcraft, who lives in British Columbia. Ashcraft has an agonizing neuromuscular condition. She wants surgery to stabilize her neck and make the pain more bearable. But in Canada’s sclerotic socialized medical system, she has been unable to obtain an appointment with a neurosurgeon for four years—and coming to the United States for the care would cost more than $100,000. In desperation, she says she is seriously considering being killed by a doctor rather than continue in pain without hope of amelioration. One suspects that she would not have to wait four years for that doctor’s appointment.

Alas, Ashcraft isn’t alone in being so abandoned. During COVID-19, a 90-year-old Canadian woman named Nancy Russell chose to be euthanized because she was distraught at the idea of being kept isolated from relatives during a spike in cases, worrying that she would experience the profound loneliness and health decline she had during an earlier nursing home lockdown. In an especially bitter irony, her relatives were allowed to be with her when she was lethally injected—but would have been excluded from her company had she chosen to go on living.

Right about now, some readers might be saying, “Well, if I were paralyzed or in unremitting pain, I would want to die too.” And therein lies the insidious trap. Because killing rather than caring for people with the most serious and painful disabilities can quickly become the default setting.

That was certainly the concern of my good friend Mark O’Brien. Mark contracted polio in 1955 when he was six. He was completely paralyzed and spent the 44 years that remained of his life in an iron lung.

Some might say that it would be better to be dead than be ensconced in a machine to breathe. To be sure, Mark’s life wasn’t easy, and he sometimes got depressed. But he refused to fall prey to despondency. Indeed, Mark’s true yearning was for full inclusion in a society too often indifferent to the common humanity of its disabled members. In fact, he insisted on it.

Toward that end, he became a disability rights activist and helped pioneer the independent living movement that allows people with disabilities to be at the cause of their lives instead of the effect of their disability. Independent living allowed Mark to reside in his own apartment cared for by an aide whom he hired—and could fire. So empowered, Mark graduated from U.C. Berkeley. He became a published poet, journalist, and essayist. He was the subject of the Academy Award-winning documentary, “Breathing Lessons: The Life and Work of Mark O’Brien.”

Mark was also an adamant campaigner against assisted suicide, which he viewed to be an explicitly anti-disabilities policy. He bitterly criticized euthanasia advocate Jack Kevorkian as a killer of disabled people, and he bluntly described the message pitched by the assisted suicide movement as “Get rid of these people. I don’t care how. Just get them out of my sight.”

Shortly before he died from post-polio syndrome, I interviewed Mark for one of my books. Mentioning all that he had accomplished, I asked whether he would change anything. He answered vehemently, “I sure as hell wouldn’t have had polio!”

No one would want that. But life is what you make of it. By this and any measurement, Mark triumphed. His funeral was attended by hundreds of mourners, including at least one girlfriend of whom I knew. And yet, in Canada and many other countries—perhaps even in California when he became so weak to be determined terminal—Mark would have qualified for facilitated death, and many would have thought that by so allowing, they were doing him a favor. Boy, would he have ever given them an earful!

Then, there was my late friend Robert Salamanca, who died of ALS. I met Bob as his hospice volunteer. A vigorous exerciser and former amateur boxer, Bob told me that he wanted to commit suicide after being diagnosed with the progressively disabling illness. This was when Kevorkian was—to much media acclaim—helping people with disabilities and terminal conditions kill themselves. Bob caught that message and wanted to die at Kevorkian’s hands. But unlike some do today, Bob’s family refused to be part of any such plan.

And was Bob ever glad they did! As he described it to me, “I came out of the fog.” Bob spent his remaining time watching his children grow, investing successfully online, and collecting art. But if assisted suicide had been legal in California at the time of his greatest despair, he might not have lived long enough to do those things.

Before he died peacefully in his sleep, Bob authored an op/ed column for the Feb. 19, 1997, San Francisco Chronicle titled, “I Don’t Want a Choice to Die,” in which he wrote in part: “Euthanasia advocates believe they are doing people like me a favor. They are not. The negative emotions toward the terminally ill and disabled generated by their advocacy is actually at the expense of the ‘dying’ and their families and friends. We often feel disheartened and without self-assurance because of a false picture of what it is like to die created by these enthusiasts who prey on the misinformed.”

In other words, the euthanasia movement message of exclusion made Bob’s life more difficult, not better. Bob wrote that, instead of people supporting facilitated death, “What we, the terminally ill, need is exactly the opposite—to realize how important our lives are. And our loved ones, friends, and, indeed, society need to help us feel that we are loved and appreciated unconditionally.”

He concluded: “In my view, the pro-euthanasia followers’ posture is a great threat to the foundation upon which all life is based, and that is hope. I exhort everyone: Life is worth living, and life is worth receiving. I know. I live it every day.”

The media continually promote the euthanasia/assisted suicide movement as “compassionate.” If so, it’s a cruel compassion. As Bob put it, “Reporting in the media too often makes us feel like token presences, burdens who are better off dead.”

So, the next time assisted suicide is presented in a positive light, remember Carboni, Ashcraft, Russell, O’Brien, Salamanca, and many others like them. Rather than putting so much emphasis on helping people die, let’s instead focus on providing the kind of care that could help those in extremis go on living.