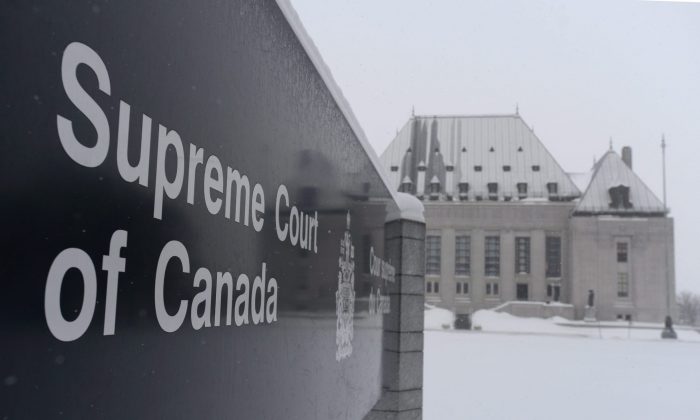 The Supreme Court of Canada ruled on Feb. 6, 2015, that mentally competent but suffering, terminally ill patients have a right to a medically assisted death. (The Canadian Press/Sean Kilpatrick)
Canada

Euthanasia and Assisted Suicide: The Supreme Court Makes a Medical Error in Judgment

Despite the Supreme Court of Canada ruling, human life remains the most precious, commonly shared value of Canadians—the right to life and the right to protect life. Life is a sacred trust and is invaluable. This principle has been enshrined in Canadian law since the founding of this country in 1867. It is reaffirmed in both the Canadian and Quebec Charter of Rights. The ruling of the Canadian Supreme Court is a seismic shift away from our most cherished values.

Recent history has taught us the dangers of the idea that certain “lives are less worthy of life.” Beginning with the severely handicapped children in the T4 program in Germany in 1938 under the supervision of medical doctors, the euthanasia of German citizens was extended to the elderly and those suffering from mental illness.

The ruling of the Canadian Supreme Court is a seismic shift away from our most cherished values.

In our present history we have the modern-day experience of Belgium and the Netherlands, where those who are not terminal but who are depressed and tired of life are euthanized upon request. Children are now candidates for euthanasia in both of these countries. Again, physicians are responsible for supervising the termination of human life.

Canada must not follow in this direction. Fundamental medical ethics—which have been based on the Hippocratic Oath and has valued human life for more than 2,500 years—are built on the concept to heal and not to kill. Medicine teaches us to “care always, to cure where possible, but never to kill.” Will the future medical oath be “heal until you must kill”?

Will patients battling cancer want to be treated by physicians who practice euthanasia and are possibly more concerned about health care costs than the value of human life?

The lack of medical care including palliative care must not become the basis for health care policy thus targeting the weaker members of our society. We are on the edge of a precipice but cannot allow our weaker citizens to be thrown off the cliff by more powerful people. We have a responsibility to defend the lives of our fellow human beings who are desperate to be cared for and supported at the most critical time in their lives. The recent cutbacks in health care including life-saving cancer drugs in this country is a bellwether of the wrong direction we are going.

Euthanasia is not a medical treatment and is not part of palliative care. Euthanasia is contrary to the medical code of ethics and to international health norms and conventions including those of the World Medical Association. Euthanasia is dangerous as a form of medical practice, with errors in diagnosis up to 20 percent and errors in prognosis up to 50 percent, and one that cannot achieve workable safeguards.

For example, in Belgium, 32 percent of euthanasia deaths are performed without a specific request from or the consent of either the patient or family despite “safeguards” (CMAJ June 15, 2010). For these reasons, palliative care must be adopted as the best practice for end-of-life care, and euthanasia and assisted suicide must be prohibited in end-of-life care.

Consent Not Truly ‘Free and Informed’

A Motion for Declaratory Judgment was filed in the Superior Court of Montreal on May 27, 2014, to challenge articles in the Quebec proposed Bill 52 pertaining to euthanasia. Lisa D’Amico, who is a handicapped person, and I are co-plaintiffs in the case.

This motion is instituted against the Attorney General of Quebec and also impleads the Attorney General of Canada. It seeks to obtain a declaration to the effect that it is not possible in Quebec for patients to provide free and informed consent to euthanasia due to their vulnerability, which is exacerbated by a lack of resources in the health care system, and because of their medical condition and the lack of universal access to palliative care for all persons who require such care, particularly to diminish suffering.

According to the Canadian Society of Palliative Care Physicians, euthanasia is an act consisting of deliberately causing the death of another person in order to put an end to suffering. Palliative care does not include the practice of euthanasia.

Appropriate palliative care is not offered uniformly on the whole in the Quebec territory or in all hospitals, and is only available at a rate of 20-60 percent depending on the region (Commission spéciale sur la question de mourir dans la dignité, March 2012, page 26). A majority of patients do not therefore have access to palliative care and will not be in a position to make a choice that would truly be free and informed.

There exists a real and imminent risk of danger that the euthanasia law will quickly lead to the termination of the lives of the more vulnerable people in our society, the first of whom are handicapped persons.

The World Medical Association, representing 9 million doctors in 100 countries, stipulates that even though the patient or his loved ones may ask for euthanasia, it is contrary to ethics. The WMA strongly encourages doctors to refuse to participate in any act of euthanasia, even if the national law authorizes it or decriminalizes it.

Since the Supreme Court of Canada has opened the door for allowing the euthanasia of our most vulnerable citizens, we are continuing our motion in the Superior Court of Montreal to have Bill 52 declared invalid.

We are also calling on the Canadian Parliament, which is the ultimate legislative branch of our country, to defend the most vulnerable of its citizens and not to allow the assisted suicide or euthanasia of its citizens.

Dr. Paul Saba is a family physician who practices in Lachine, Quebec. He is co-president of the Coalition of Physicians for Social Justice defending the health care of all Canadians.