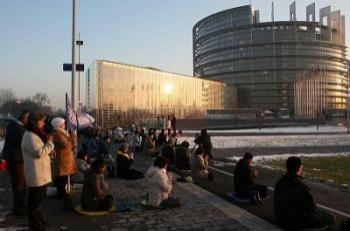 Evan Mantyk
Evan Mantyk is an English teacher in New York and President of the Society of Classical Poets.
View profile
Follow
biggersmaller
Print
After turning down one invitation, European satellite company Eutelsat has been sent a second, more strongly worded invitation from three Members of European Parliament (MEPs) over concerns that Eutelsat caved to pressure from the Chinese communist regime.

The France-based private company terminated broadcast of the network, New Tang Dynasty Television (NTDTV), into China in June, 2008, citing technical reasons. A July 10 investigative report by Reporters Without Borders (RSF) revealed, however, that the broadcast cut was a premeditated act, owing to influence from the Chinese regime ahead of the Beijing Olympics.

On Jan. 15, the European Parliament, one of the most powerful legislative bodies in the world, passed a resolution calling on Eutelsat to resume NTDTV’s broadcast and clarify its reasons for suspending the broadcast.

“Given the seriousness of this matter and recent resolution of the European Parliament, we invite you again to visit us in Strasbourg during the next plenary session between 2nd and 5th of February,” reads the letter, dated Jan. 22.

“Should you not be interested in this exchange of view we would consider that as a precise political signal,” continues the letter, signed by MEPs Marco Cappato, Anna Foltyn-Kubicka, and Thomas Mann on behalf of the more than 400 MEPs who signed the resolution.

The incriminating evidence against Eutelsat includes a recorded phone conversation released by RSF in which a Eutelsat representative in Beijing admitted to the caller—who the representative thought was a Chinese Propaganda Department official—that the company’s move to cut NTDTV was politically motivated.

The Department for Foreign Affairs of Berlin has classified the recording as credible. The Department said that when they contacted Eutelsat's German representative, the representative admitted that it was a politically motivated decision and asked for anonymity.

In response to the first invitation to Eutelsat, the company president said he could not attend and invited the MEPs to Eutelsat’s headquarters in Paris, France instead.

MEPs have questioned the integrity of Eutelsat’s first response.

“It’s obvious that he’s afraid to come. He’s afraid to come and face the Members of Parliament because there is no explanation for closing the signal [into China] and that is obvious,” said Foltyn-Kubicka, through a translator.

MEPs have pointed out three areas of pressing concern for human rights in China, including the persecution of the Falun Gong spiritual group and the suppression of rights in Tibet. The third area is the Chinese regime’s “organ harvesting,” the name for the fatal removal and sale of organs from death row prisoners and from Falun Gong practitioners held for their beliefs.

The EP is one of two legislative bodies that make up the legislative branch of the European Union, a governing body including 27 European nations.

“The EU is based upon and defined by its adherence to principles of freedom, democracy, and respect for human rights, fundamental freedoms and the rule of law,” reads the resolution.