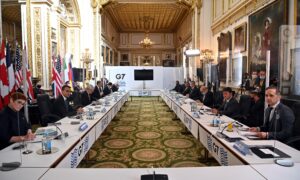 Amidst accusations that they caved to pressure from the Chinese communist regime, France-based satellite company Eutelsat has turned down a chance to explain itself in front of the European Parliament. Eutelsat Chairman Giuliano Berretta was invited last month by five Members of European Parliament (MEPs) to discuss the company’s termination of an independent Chinese-language television network’s broadcast into China.

In a letter dated Dec. 23, the Director of Strategy and Institutional Relations of Eutelsat turned down the invitation on behalf of Berretta.

“Unfortunately, considering the date of the plenary session and the commitments already planned, M. Berretta won’t be able to come in Strasbourg in January,” reads the letter.

Eutelsat terminated broadcast of New Tang Dynasty Television (NTDTV) into communist-controlled China in June, 2008, citing technical reasons. A July 10 investigative report by Reporters Without Borders revealed, however, that the broadcast cut was a premeditated act, owing to influence from the Chinese regime ahead of the Beijing Olympics.

MEPs are reading Berretta’s refusal to meet as further evidence that Eutelsat has something to hide.

“It’s obvious that he’s afraid to come. He’s afraid to come and face the Members of Parliament because there is no explanation for closing the signal [into China] and that is obvious,” said Hanna Foltyn-Kubicka, one of the MEPs who sent the letter to Berretta, through a translator.

“I would like to ask [Berretta] how could it happen that a democratic country like France does not respect the basic rights for freedom and for information,” said Foltyn-Kubicka.

Marco Cappato, another MEP who sent the letter, said that the fundamental question has not been answered.

“It is very important that we receive a concrete response from Eutelsat… the one needed should allow NTDTV to be back broadcasting,” said Cappato.

“Information is the basic tool not just for human rights activists or people that are asking for freedom of religion or culture or thought, it’s simply the basic element of democracy and civil society,” he said.

Reports from Reporters Without Borders have shown that Eutelsat’s current claim that it does not have space on its W5 satellite for NTDTV is not accurate.

"There is plenty of spare capacity on Eutelsat's Satellite W5, particularly since the US Broadcast Board of Governors has withdrawn from it, for instance. Voice of America left Satellite W5 as of August 1, leaving excess capacity available,” said MEP Bart Staes. “The fact is, they're giving in to pressure from the Chinese communist regime.”

Eutelsat’s “credibility is at stake and we urge its shareholders to intervene as quickly as possible so that NTDTV can resume broadcasting on this satellite,” said Reporters Without Borders.

A written declaration currently circulating among the European Parliament urges Eutelsat to resume NTDTV transmission to China and calls on EP Member States to take “necessary action to help restore NTDTV’s broadcasts to China and to support access to uncensored information for millions of Chinese citizens.”

Ahead of the January session of the EP, the declaration penned in October already has 315 signers from the 785 MEPs. If a majority of members signs the declaration, it automatically becomes a passed resolution and is read by the EP President at the next session, a strong message to Eutelsat and a victory for China’s surging human rights movement. MEPs have pointed out three areas of pressing concern for human rights in China, including the persecution of the Falun Gong spiritual group and the suppression of rights in Tibet. The third area is the Chinese regime’s “organ harvesting,” the name for the fatal removal and sale of organs from death row prisoners and from Falun Gong practitioners held for their beliefs.