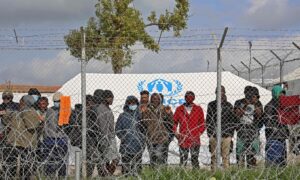 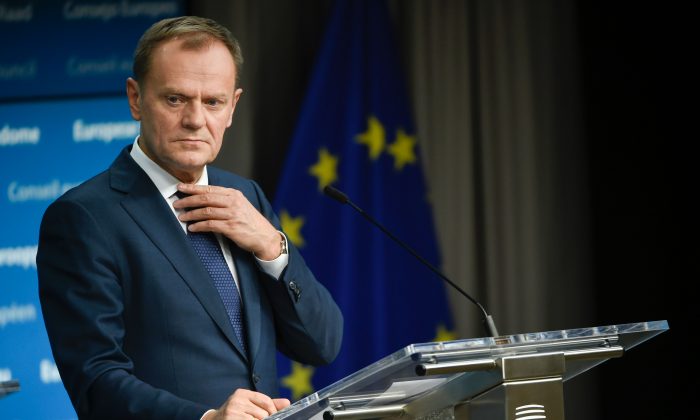 ATHENS, Greece—The European Union’s leader chose the continent’s main gateway for immigrants Thursday to bluntly warn economic migrants not to even think of coming to Europe, while promising to work for a solution to the more immediate problem of refugees.

“I want to appeal to all potential illegal economic migrants, wherever you are from: Do not come to Europe,” European Council President Donald Tusk said in Athens. “Do not risk your lives and your money. It is all for nothing. Greece, or any other European country, will no longer be a transit country.”

While people seeking a better life are among the migrants building up in Greece, the majority of arrivals are refugees from war and persecution. They aim to leave financially wrecked Greece to seek asylum in a country that can offer them more, such as Germany or Sweden.

But a series of restrictions imposed by Austria and other countries—first on economic migrants but most recently on refugees—has created a huge bottleneck in Greece. While nearly 2,000 people arrive on Greek islands every day, Greece’s northern neighbor Macedonia only allows a few hundred through, on a good day, and only Syrian and Iraqi nationals.

Tusk, who is touring countries worst affected by the mass movement of people through Europe, said the situation along the Western Balkan migration route is “really dramatic, and so we must act with determination to improve it.”

Greek Prime Minister Alexis Tsipras called Thursday for sanctions on EU states that refuse to take in their share of the incoming refugees, and demanded that the practically dormant procedure for relocating refugees stranded in Greece to other members of the bloc should be drastically accelerated.

After his meeting with Tusk, Tsipras promised “dignified” living conditions for the more than 25,000 people—mostly bona fide refugees—trapped in Greece. But he insisted that the solution can only be temporary, and Greece will accept no more than its fair share of permanently resident refugees.

At least 10,000 men, women and children have been camped for days in pathetic conditions at the Idomeni border crossing with Macedonia. Protests have been frequent, and this week Macedonian police used tear gas and stun grenades to repel hundreds of Syrians and Iraqis who had torn down a border gate.

On Thursday, a group of frustrated migrants blocked a freight rail line at Idomeni in protest at Macedonia’s refusal to let them in.

Macedonian authorities have said they will only let in as many people as the next country on the route, Serbia, takes. Greek police said that in the 24 hours to 6 a.m. Thursday, 500 people were allowed to cross.

Some of those, however, were then turned back by Macedonian authorities who said their papers were not in order. One man fainted after he was told to go back.

The migrants said Macedonia did not accept computer-generated stamps issued by the Greek police, and therefore they could not prove their identity documents are genuine.

Adnan Abdallah from Syria had waited to cross from Greece to Macedonia for three days, but when he finally was let through, he was turned back because the stamp on his refugee document is computer-generated.

“They say here (in Greece) everything is OK, but on the other side this is not acceptable,” a frustrated Abdallah told The Associated Press.

Macedonian authorities, who had been letting in small groups of migrants Thursday morning, closed the border again after the railway protest.

In Athens, Tusk indicated that without full respect of controls on the external borders of Europe’s passport-free Schengen area, Europe has no chance of resolving the crisis.

Tusk spoke after talks with Tsipras. Later Thursday, he will travel to Turkey, from where most migrants enter Europe on dangerous smugglers’ boats. The EU is struggling to implement an agreement with Turkey that could reduce the flow.

“We must do everything we can for (the joint action plan) to succeed,” he said. “This ultimately means that the high numbers we are still witnessing have to go down, and quickly so.”