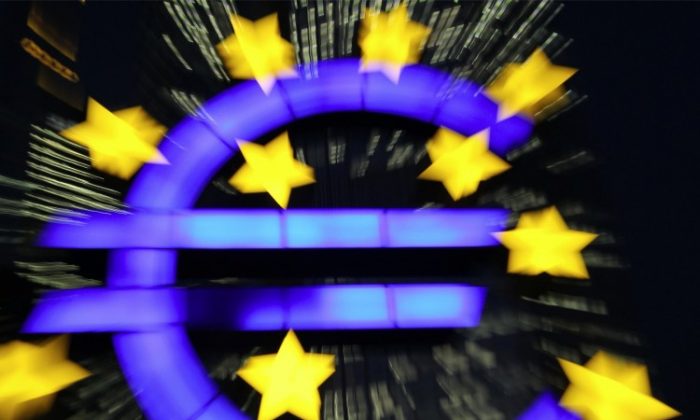 The logo of the European currency euro is shown standing in front of the European Central Bank (ECB) in Frankfurt. Due to a spate of recent downgrades, the Eurozone is working on establishing its own independent credit ratings agency. (Daniel Roland/AFP/Getty Images)
Business

MUNICH—After the latest row of downgrades of nine EU countries, many German and French politicians as well as corporate CEOs have openly criticized Standard & Poor’s (S&P) methods of rating, stating that it is biased.

Michael Barnier, the European commissioner in charge of internal markets, is of the opinion that the downgrades do not have solid reasons and he was “surprised at the moment chosen” by S&P, and “its evaluation which does not take into account recent progress.”

As a result of being downgraded, Europe feels misrepresented and manipulated, and most of all, helpless in the financial markets.

To address this problem, EU proposed to establish its own credit rating agency. Strongly behind the idea is Roland Berger Strategy Consultants, a Munich-based management consultancy firm, which aims to create its first ratings by the end of 2012.

One of the basic ideas of the proposed European rating agency is its independence from politics and it should be a not-for-profit organization.

“We are pleased that European politicians support us with the idea, but we don’t want to be financed by their tax money,” said Markus Krall, a partner at Roland Berger Strategy Consultants. “The involvement of the state could undermine our independence efforts. We are very determined to create an independent structure. Tax money would only put in question the trustworthy start of the agency.”

The new European rating agency will need about 300 million euros (US$398 million) to set up its operations to become a high caliber rating agency on par with S&P, Moody’s Investors Service, and Fitch Ratings, the three biggest international ratings agencies. Roland Berger, the founder of Roland Berger Consultants, will ask this startup capital from the finance and IT sectors.

Many German and French companies are already thrilled about this idea and are ready to contribute startup capital.

“We are now rising to the second round of collecting signatures [to secure 300 million startup capital]. In the beginning of second quarter we will most likely be done,” said Markus Krall. “I am assuming that we will have about 30 participants.” About a third of them will come from Germany, and the second biggest contributor group will be from France. Other EU countries will also participate.

“At the end of the year the European Rating Agency will release its first ratings,” said Krall. He said that the new rating agency will need about 25 to 30 highly qualified analysts.

The European Rating Agency will be located in Frankfurt am Main—the center of EU’s financial trading activities and the headquarters of the European Central Bank.

“I am delighted that the initiative to establish a European rating agency has been started in the financial center of Frankfurt, and that concrete steps toward realization are about to be taken,” said Lutz Raettig who is the Chairman of the Presidential Committee of Frankfurt Main Finance, in a statement. “The complete and true independent of the agency will be crucial and Frankfurt is the place to get started, as it provides the natural proximity to and intensive exchange with the European Central Bank and the European Systemic Risk Board,” he added.

Roland Berger, the person behind this whole initiative, is very active and an engaged businessman who has seen it all in business.

He founded Roland Berger Strategy Consultants in 1967 in Munich. He also served as a close advisor to Gerhard Schröder, the predecessor of German Chancellor Angela Merkel. He declined the chance to become Economics Minister in 1998, when Schröder was German Chancellor.

Roland is also the founder of Roland Berger Foundation for Human Dignity, an active supporter and protector of human rights worldwide.

He is a founding partner of BLM Partners, a Capital Asset Management firm located in London. He serves as a German Chairman on the International Advisory Board of Blackstone Group and is a member of the Board of Director of FIAT Group and INSEAD. And Lastly, Roland Berger is also a member of the supervisory board of the pharmaceuticals and healthcare company Fresenius SE.