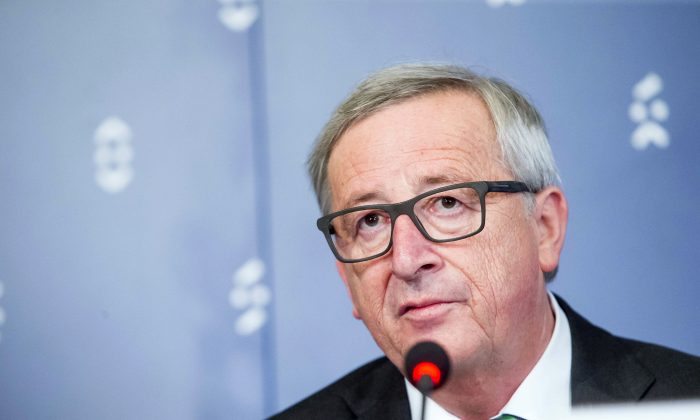 The President of the European Commission Jean-Claude Juncker speaks at a press conference with the Slovak Prime Minister Robert Fico in Bratislava on July 1, 2016. (AP Photo/Bundas Engler)
Europe

BRATISLAVA, Slovakia—Europe in turmoil. Britain dealing the European Union a heavy blow. People power causing the EU great angst over what its mission should be. Terror strikes in a major capital.

“We cannot continue as if nothing had happened … Europe’s crisis is deep,” warned EU chief Jean-Claude Juncker. “A period for reflection, clarification and discussion is called for.”

We cannot continue as if nothing had happened … Europe’s crisis is deep.
— Jean-Claude Juncker, president, European Commission

Those comments and events ring true today—but they are actually from June 2005.

At the time, Juncker’s Luxembourg held the EU’s rotating presidency. A Tony Blair-led Britain had just destroyed his blueprint for a long-term EU budget by insisting on getting its money back. Weeks earlier, Dutch and French voters had rejected a draft EU constitution, ending two years of behind-the-scenes work.

In early July 2005, the London transport system was attacked by extremists who killed 52 people.

So much has changed since then, yet so little appears different—except perhaps that Europe rallied to Britain’s side after the July 7 bombings. Today, the U.K. appears to be in virtual quarantine out of fear that its anti-European streak might be contagious.

Brexit: What Took the Brits so Long to Leave?

Though the crises today may be different—Europe’s failure to manage a surge of refugee arrivals, Greece’s debt mountain and future in the shared euro currency—they raise the same questions about how to make the EU relevant to people, whether they be in Malta or Finland or Germany.

Even to many in the 28-nation bloc, Europe seems remote. There are no “European nationals,” and the citizens of Europe distrust distant Brussels even more than their own governments.

Indeed it’s unclear what Europe might do now that it could not have done a decade ago, as far-right parties cry victory in the wake of Brexit and shout for others to follow the U.K. lead.

“The challenge for Europe’s leadership is to address the legitimate grievances of people dissatisfied with Europe, without kowtowing to the ideologies of the extreme left or right,” said Etienne Davignon, president of the Friends of Europe think tank.

“We must not use the current crisis as an excuse to push endlessly for ‘more Europe,'” he said. “The answer is responding quickly to specific questions from citizens who want a better and more secure life.”

Stefano Micossi at the Centre for European Policy Studies said European leaders “need to think about tangible and achievable goals, even if they are not easy, which would show the world that the EU will not only survive, it will grow stronger.”

To judge by Juncker’s remarks Friday, the EU’s executive Commission he leads is already enacting some deep reforms that Britain itself has asked for—but will not budge on core beliefs.

“I will not say that nothing has to change, but things moving in the right direction will not change,” he told reporters in Bratislava as Slovakia took over the EU’s rotating presidency from the Netherlands.

Juncker said the Commission has significantly cut red tape and is proposing less legislation than its predecessors so that Europe acts mostly where it’s needed. He wants to plow ahead with deepening Europe’s single market and connecting up its energy markets.

But on migration—not the challenge of refugees, but on the key issue of whether citizens of EU nations should be allowed U.K. social benefits like payments to families or unemployment—he is intransigent.

Too Much Brussels in EU, New Presidency Says After UK Exit

Prime Minister Robert Fico, leading a right-leaning Slovak government that has felt dictated to from Brussels over the refugee emergency, has called for “a new balance” between Europe’s institutions and its member states, with nations having more say.

Fico will host an informal summit of EU leaders in Bratislava on Sept. 16, and he believes that breaking with the past and doing things outside of Brussels is the way to go.

“We can’t keep on with business as usual,” he said.

Slovakia in particular wants to keep Europe’s door open to aspiring nations, particularly in the Balkans. The prospect of EU membership there has driven reform and prevented countries from falling back into war.

For Camino Mortera-Martinez, a research fellow at the Centre for European Reform, the old continent needs “outsiders—strong, clear-minded leaders and thinkers, with a vision for the continent who were not born and bred within the European bubble.”

“Europeans are scared, they are wary of migration, many have lost their jobs. Brussels cannot counter-attack with yet another round of good-for-nothing summits and empty political declarations,” she said.