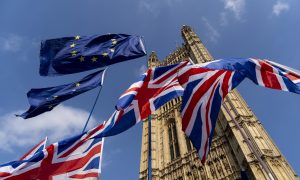 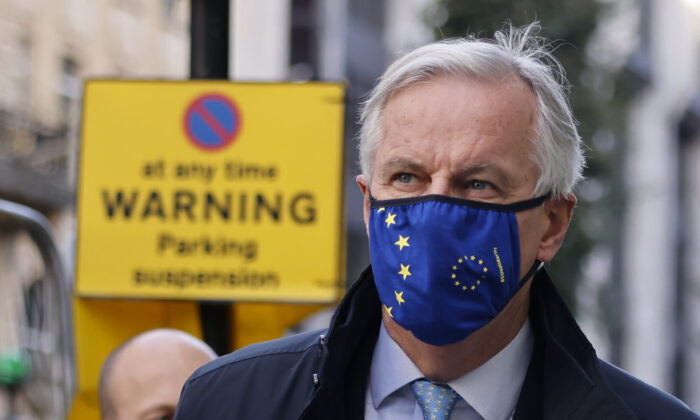 EU chief negotiator Michel Barnier leaves a conference centre as talks continue between the EU and the UK in London on Nov. 12, 2020. (Tolga Akmen/AFP via Getty Images)
UK

With just days left to thrash out a Brexit trade deal, the EU’s chief negotiator has suspended talks with his UK counterpart after someone on his team tested positive for the CCP virus.

The European Union’s Brexit negotiator, Michel Barnier, said the negotiations were paused “for a short period”.

“The teams will continue their work in full respect of guidelines,” Barnier said.

“One of the negotiators in my team has tested positive for COVID-19,” he wrote in his message on Twitter. “With [David Frost], we have decided to suspend the negotiations at our level for a short period.”

It’s not clear what time-frame he was referring to.

Within five minutes, Frost had responded, saying he was in close contact with his counterpart about the situation. “The health of our teams comes first,” Frost wrote on Twitter. “I would like to thank the EU Commission for their immediate help and support.”

In just six weeks the UK will sever ties with the trading bloc, regardless of whether a deal has been struck or not.

The long-running talks have already left several broken deadlines in their wake, with both sides trying to avoid the “no-deal” scenario at midnight on Dec. 31, but unable to break the impasse over fishing rights and “level playing field” on access.

The European Commission is still holding back contingency plans for a no-deal Brexit—in what some interpret as a signal of willingness to carry negotiations even closer to the wire.

Some EU leaders have pushed for an update to the plans, which they say is needed to avoid disruption by the cracks between trade rules that would spring up at the last minute if no deal is reached.

Finland’s European affairs minister, Tytti Tuppurainen, told Reuters on Nov. 19 that talks are at “a critical stage” but can still yield a “comprehensive and balanced” deal.

“The time pressure is huge, and we all realise that time is running out,” she said.

Standing in the way of a deal are three persistent issues: the largely symbolic fishing rights; an economic “level playing field” between companies without either bloc being able to put their finger on the scales; and agreeing on how to settle trade disputes.

Earlier this week, Prime Minister Boris Johnson said once again that he was “confident [the UK] will prosper” if no deal is struck, as Health Minister Matt Hancock said the government was sticking to its “red lines”.