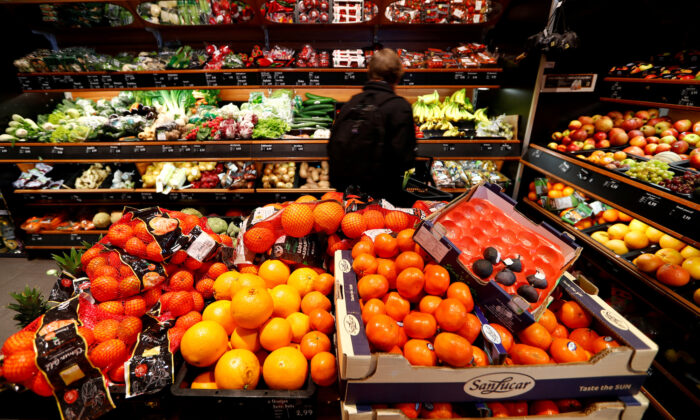 Produce is pictured in a supermarket in Berlin, Germany, on March 17, 2020. (Fabrizio Bensch/File Photo/Reuters)
Commodities

Inflation in the 19 countries that share the euro currency jumped to a record high in May, largely on the back of soaring food and energy prices, which could climb higher still on the back of the E.U.’s new pledge to ban most Russian oil imports.

Eurostat, the E.U.’s statistical agency, said in a May 31 estimate (pdf) that the annual pace of inflation in the euro area rose from April’s 7.4 percent to 8.1 percent in May, a record high.

A year ago, that figure stood at 2.0 percent, in line with the European Central Bank’s (ECB) inflation target.

Pandemic-related supply chain dislocations, the swell of easy money that flooded markets to bolster struggling European economies, and now disruptions related to the war-like Russian blockades of Ukrainian ports and embargoes on Russian energy, have all factored into skyrocketing inflation over the past year.

Besides the headline pace of eurozone inflation hitting a new high, core inflation—which strips out the volatile categories of food and energy and is viewed as a better measure of underlying inflationary pressures—also rose.

“The main concern is around core inflation. The jump from 3.5 to 3.8 percent today shows that high input prices are being priced through to the consumer at a fast pace. While selling price expectations from businesses have ticked down slightly in May, expectations are that core will remain well above target for the coming quarters as higher input prices trickle through to the consumer,” analysts at ING said in a note.

Not only have prices risen sharply, but expectations for further price increases in the future have also grown, leading to concerns about a possible de-anchoring of inflation expectations and the dreaded wage-price spiral that would push prices higher still.

A recent ECB survey of professional forecasters showed that future inflation expectations were revised up by 3.0 percentage points for 2022, up to 6.0 percent, mostly reflecting higher energy and food price inflation.

Eurostat data shows that food prices in the euro area jumped 7.5 percent in the year through May while energy prices soared 39.2 percent. Both are major contributors to the headline pace of inflation.

The surveyed forecasters also revised their inflation expectations for 2023 by 0.6 percentage points to 2.4 percent, while leaving their 2024 forecast unchanged at 1.9 percent.

They also lowered their expectations for economic growth in the eurozone for this year and the next.

“Overall, respondents indicated that the war in Ukraine and its effects were the primary factors behind the revisions to their inflation and growth forecasts in 2022 and 2023,” the ECB said in a statement.

And while the most recent E.U. Economic Sentiment Index showed a slight downtick in selling price expectations in May among consumers, analysts at ING noted that, “given the volatile environment, it is too early to call a peak on inflation rates,” adding that the survey overall “continues to indicate strong price increases for the months ahead.”

Eurostat’s inflation data comes a day after E.U. leaders agreed at summit in Brussels to embargo the majority of Russian oil imports into the bloc by the end of 2022 as part of the sixth package of sanctions against Moscow over its invasion of Ukraine.

In the weeks leading up to the agreement, some experts and industry groups warned that an E.U. ban on Russian energy threatened to drive inflation higher.

“Russian oil can be replaced on the world market in the short term, but with additional costs and logistical challenges,” German industry trade group BDI said in early May. “Given the oil embargo, energy prices will probably continue to rise.”

The euro area inflation numbers also come ahead of a key meeting of the European Central Bank (ECB) next week, where officials are expected to announce a shift away from the easy money policies of recent years.

ECB President Christine Lagarde recently suggested that quarter-point hikes in July and then September were likely.

Lagarde wrote in a recent blog post that she expects net purchases under the ECB’s asset-buying program to end “very early in the third quarter,” paving the way for the central bank to start boosting rates in July.

“Based on the current outlook, we are likely to be in a position to exit negative interest rates by the end of the third quarter,” Lagarde wrote.

The ECB’s key policy interest rate is currently set at minus 0.5 percent.