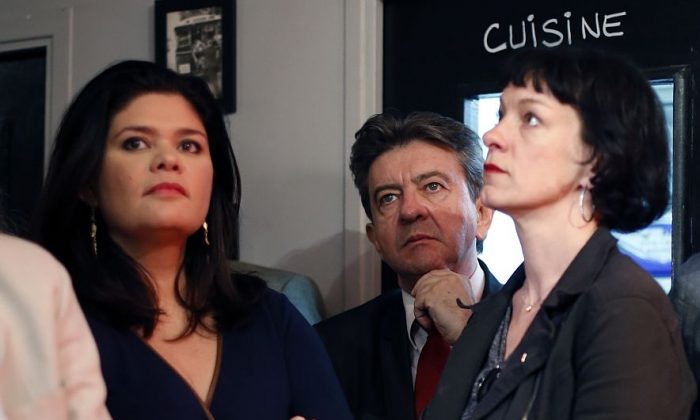 Commenting on last week’s elections for the European Parliament, French Prime Minister Manuel Valls spoke of a “political earthquake.” It was indeed an earthquake. Marine Le Pen’s anti-immigrant and euroskeptic Front National placed first with 25 percent of the vote in France, well ahead of the major conservative party and the governing Socialist party. As a result, the National Front will have 24 seats in the next parliament, 21 more than it won with 6 percent of the vote in 2009.

The earthquake was not confined to France. In the U.K., Nigel Farage’s anti-EU United Kingdom Independence Party (UKIP) received 27 percent of the vote It outpolled the opposition Labor party, the governing Conservatives, and the pro-EU Liberal Democrats. In Denmark, the xenophobic and euroskeptic Danish People’s Party (DF) placed first with 27 percent of the vote, twice its 2009 vote.

In Greece, the anti-euro, anti-austerity hard-left Syriza (Coalition of the Radical Left) led all parties with 27 percent of the vote, while on the other side of the party spectrum the neo-fascist Golden Dawn received more than 9 percent. And in Austria, the anti-immigrant and euroskeptic Freedom Party (FPO) obtained 20 percent of the vote.

In Spain, the governing conservative and opposition Socialist parties both saw their share of the vote drop by 16 percentage points while the anti-austerity United Left (IU) tripled its vote to more than 10 percent, the new anti-austerity Podemos (We Can) got 8 percent, and a group of small parties got 15 percent.

In Italy, although Prime Minister Matteo Renzi’s center-left Democrats increased its vote by some 15 percentage points to more than 40 percent, Beppe Grillo’s anti-establishment and anti-euro Five Star Movement took 21 percent of the vote. And although Geert Wilders’s Party for Freedom (PVV) didn’t match its 2009 tally, it did obtain more than 13 percent of the vote.

The ripples were even felt in Germany, where the vote for Angela Merkel’s Christian Democratic Union and its Bavarian sister party, the Christian Social Union, dropped by almost 3 percentage points. Their coalition partner, the Social Democrats, increased its vote by more than 6 percentage points and the new anti-euro Alternative for Germany obtained 7 percent.

The conventional view of European Parliament elections is that they are “second-order national elections”—elections that occur in the periods between the more important national elections, are contested by national parties about national issues, and the performance of the national governments and, because of their lack of national importance, are greeted with widespread public apathy that’s reflected in unusually low levels of voter turnout.

There’s a good deal of truth in that view. The elections were indeed contested by national parties, the parties that did well typically framed their appeal in terms of their opposition to the policies of the national government, and the parties that suffered the biggest losses tended, with the notable exception of the Italian Democrats, to be those which currently govern—the Socialists in France, the Conservatives and Liberal Democrats in the U.K., the Popular Party in Spain, New Democracy in Greece—or recently governed.

Nevertheless, this year’s European elections weren’t just “second-order national elections.” They also constituted a 28-country referendum on the EU—its role vis-à-vis the member states and its performance over the past five years. And even taking into account the low turnout, which tempers the extent to which the victories of the Front National, UKIP and the others can be regarded as earth-shaking landslides, the results constitute a profound indictment of the EU.

The big winners don’t agree on every issue. For example, Farage has said UKIP won’t join the Front National and the Dutch PVV in a parliamentary group because it doesn’t share their views regarding immigration. Nevertheless, most would probably agree with Marine Le Pen’s comments Sunday evening about what the National Front voters want and what its leaders must do: “Our voters want politics by the French for the French and with the French. They don’t want to be led anymore from outside. … We must build another Europe, a free Europe of sovereign nations and one in which cooperation is freely decided. Tonight is a massive repudiation of the European Union.”

Le Pen’s words, and the euroskeptic wave, reflect something real—the dramatic erosion over the last several years in the democratic legitimacy of the EU, an erosion that is seen in the sharp drop in the proportions of respondents in the EU-wide eurobarometer surveys who say they are satisfied with the way democracy works in the EU and who say they trust the EU and its institutions. Two-thirds of all Europeans now believe their voice doesn’t count in the EU and 60 percent distrust it.

It’s tempting to assume the euroskeptic tide will dramatically change the composition of the new European Parliament and policymaking in the EU. It won’t. The parliament, which will have 751 members, will continue to be controlled, as it always has been, by a duopoly of the two largest party groupings—the center-right European People’s Party (EPP), which, although losing some 55 seats, will still be the largest with approximately 210 members of the various Christian democratic parties, and the center-left Socialist and Democrats, which will have approximately 190 members of the various socialist and social democratic parties.

The wave of new euroskeptic members on both the left and right, coupled with the EPP’s loss of seats, means the parliament will be more polarized and perhaps, for that reason, more interesting to voters. But the more important consequence of the euroskeptic wave is likely to be seen not in the parliament but in the next round of national elections—for example, in the U.K. election next spring and the French presidential election in 2017.

The European elections were an unparalleled triumph for euroskepticism. But however depressing the results were for supporters of European integration, they were offset by the outcome of another election—one that in all likelihood is far more important over the long run: On May 25, Petro Poroshenko was elected president of Ukraine.

Poroshenko, who intends to complete the association agreement with the EU in the near future, won by a relative landslide—54 percent—in an election in which there were 20 candidates, including the charismatic Yulia Tymoshenko and in which, despite the inability of most voters in the Donetsk and Luhansk regions in eastern Ukraine to vote and in contrast to the widespread apathy in much of the EU, a substantial portion of the electorate turned out to vote. His election, and the scale of his victory, might—just might—represent the first step toward a resolution of the crisis in Ukraine.

David R. Cameron is a professor of political science and director of the Yale Program in European Union Studies. © 2014 The Whitney and Betty MacMillan Center for International and Area Studies at Yale.