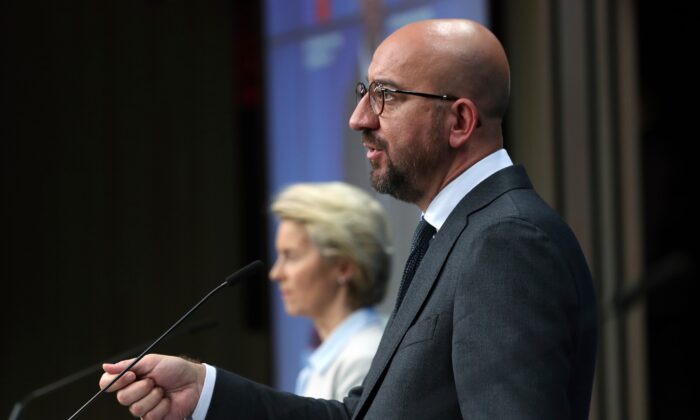 As the Chinese regime continues to treat the world like it treats its own citizens, the European Union is stepping up to confront Beijing. If not a new role, it is certainly a new level of engagement for the EU against the regime’s appalling oppression of its people.

The EU’s responses toward China over the course of this year is a welcome development. This is especially true in light of America’s waning leadership and apparent unwillingness to confront China and defend American interests, of which human rights has been a pillar for decades. The U.S. military’s inglorious exit from Afghanistan in the middle of the night in August damaged American prestige and credibility in the world, leaving a void that China is hoping to fill.

But Beijing is finding it harder to replace the U.S. role in the world than it may have imagined. The reality is that China’s multiplying internal problems are clear indications that its own prestige and power are also declining. The pandemic helped that process along, but it certainly hasn’t been the only factor.

For example, the soft power and cultural affinity that Beijing worked so hard for decades to establish and promote around the world is all but gone. Few really believe that China is a benevolent force in the world or an economic model to emulate. Due to the Belt and Road Initiative (BRI) debt traps, the spyware of Huawei, the propaganda focus of the Confucius Institutes and more, most of the goodwill toward China has been lost. The CCP virus (commonly known as the novel coronavirus) and its aftermath was the last nail in the Chinese Communist Party’s public relations campaign.

Furthermore, the CCP’s state capital economic system is proving to be anything but reliable or efficient. China is currently suffering from rolling blackouts, falling GDP, food shortages, civil unrest, an outflow of foreign manufacturers, and an emerging financial crisis. As a consequence, the CCP has found it necessary to impose even more stringent controls and abuses on the people.

What’s more, those ongoing abuses can no longer be hidden behind a wall of silence or denial. There are clear and verified accounts of multiple incidents of slave labor conditions, torture, and forced sterilizations conducted by the CCP against Muslim populations and others who speak out or dissent against the Party leadership. They deny their culpability, of course, but in both trade and human rights contexts, CCP leaders have lost all claims to credibility. Few nations, if any, view the CCP as a government that has the best interests of anyone but themselves at heart.

China Takes the Gloves Off With Australia

Evidently, the CCP knows this as well. That realization goes a long way in explaining their unvarnished nuclear targeting threats against Australia. Beijing is aware that it must play to the country’s strengths, which is its military power, because that’s the only reliable power that remains undiminished. That’s not surprising, since brute power is truly the only language that China’s leadership understands or respects.

EU Takes Gloves Off With China

That is why it is gratifying to see that the EU is making Beijing pay a much bigger price for its inhumane behavior than it has in the past. Recall that in March of this year, for example, after almost a decade of negotiations, the EU-China Comprehensive Agreement on Investment (CAI) was put on hold.

The pause in those negotiations is turning out to be a very significant blow to China, because it viewed the CAI as a strategic action to divide the Europeans from the United States in a variety of economic and even military contexts. The EU has let Beijing know that that’s not going to happen. In fact, when it comes to common interest between Brussels and Beijing, EU leadership understands that there is actually less there than meets the eye.

The reason for that is simple and clear. The EU operates and competes within the existing liberal economic order, which is a product of the West and Western ideas.

CCP Is Out of Touch With the Rest of the World

China’s chauvinistic vision for the world, however, is quite different. Brussels and every European nation trading with China now realize that Beijing’s endgame, per its “Made In China 2025” mission, is to hollow out the technology sectors of the West and Asia, making the client states dependent upon China for technological production and innovation.

The EU is not about to let that happen.

As one would expect, Beijing’s vision caused significant blowback from the rest of the world. But more revealing is the hubris of the CCP for imagining that it could openly state such a goal and not expect any consequences. If nothing else, it’s a staggering demonstration of just how out of touch the Party leadership is with the rest of the world.

Fortunately, the EU is now doing what needs to be done and what the United States should be doing more of as well. Hopefully, the EU’s pushback against the Chinese leadership will continue.