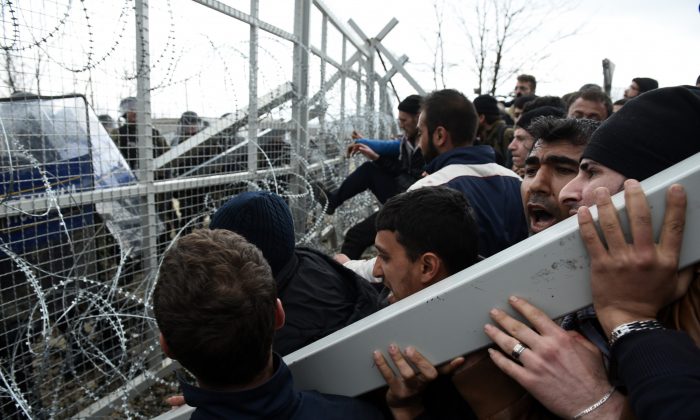 Refugees and migrants try to break an iron fence from the Greek side of the border as Macedonian police stand guard, near the northern Greek village of Idomeni on Feb. 29, 2016. (AP Photo/Giannis Papanikos)
Europe

IDOMENI, Greece—Pressed against coils of razor wire and shouting “Help us!,” refugees stranded at Greece’s northern border were pushed back Monday by Macedonian police using tear gas and stun grenades, as the European Union scrambled to ease the escalating number of stranded migrants in Greece.

In a chaotic scene, Syrian and Iraqi refugees forced their way through part of a Macedonian border fence, some clutching infants or struggling to free duffel bags caught in the razor-wire fence. They were met by Macedonian riot police, bolstered by dozens of special forces officers flown in by helicopter to quell a refugee protest.

“Tragically, there seems to be more willingness among European countries to coordinate blocking borders than to provide refugees and asylum-seekers with protection and basic services,” said Giorgos Kosmopoulos, Amnesty’s director in Greece.

Some 7,000 migrants, including many from Syria and Iraq, are crammed into a tiny camp at the Greek border village of Idomeni, and hundreds more are arriving daily. The border pileup began ten days ago, when Austria and four ex-Yugoslav countries on the Balkan migrant route north into Western Europe decided to slow border access for migrants to a trickle—and stopped letting Afghan migrants travel through their territory.

A U.N. official says those nations never did explain who made the decision on Afghan migrants, or why.

Donald Tusk, the European Council President, begins of tour of those countries Tuesday, starting in Vienna, which has been strongly criticized by other EU nations for its caps on asylum-seekers, and ending Thursday in Athens. Tusk is aiming to prepare for a meeting of leaders from the EU and Turkey on March 7, where the key topic will be trying to halt the flow of migrants from Turkey to Greece.

The number of migrants stranded in Greece topped 22,000 over the weekend, according to government estimates. Thousands have been sleeping outside in parks and along northbound highways, as refugee shelters quickly overflowed.

“Very many people were forced to sleep in the open, without tents, wrapped in blankets,” said 45-year-old Syrian refugee Nidal Jojack, who has been camped out with her family at Idomeni for three days.

“It was very cold. The borders are effectively closed, it’s a huge problem. To get food, we have to wait in very long queues,” she said.

Jojack said she hopes to reach Germany, where her 18-year-old son has already arrived.

Despite receiving the bulk of the refugees seeking the safety of Europe, Germany has opposed unilateral border restrictions and continued to back an EU-wide solution for the migrant crisis. German Chancellor Angela Merkel is resisting calls at home and elsewhere in Europe for limits on refugees like Austria.

“We can’t do this in such a way that we simply abandon Greece,” she told public ARD television. “This is exactly what I fear: When one country defines its limit, another must suffer. That is not my Europe.”

At next Monday’s summit, EU leaders “will discuss how we can restore the (passport-free) Schengen system step by step with Greece,” Merkel said.

But Austria’s deputy chancellor, Reinhold Mitterlehner—in a sign of continued diplomatic tensions—declared Monday that the refugee restrictions “are necessary (and) we’re going to maintain them.”

Wolf Piccoli, head of research the global advisory firm Teneo Intelligence, said the EU was making a “risky bet” with its strategy on migration.

“The EU is betting on incremental steps, hoping that the backlog will deter potential migrants before tensions in Greece raise concerns over the country’s institutions,” he said.

So far, border closures have not stopped migrants from coming.

Greek authorities say over 1,800 people a day have reached Greece’s islands from Turkey in February, slightly down from 2,175 a day in January.

Accidents are frequent as dozens cram into unseaworthy boats provided for a high price by smuggling gangs. Ninety-six people have drowned in Greek waters alone so far this year, with another 34 missing at sea.

Struggling to cope with the crisis, Greece’s government has issued a temporary ban on journalists visiting migrant camps and called opposition party leaders to an emergency meeting Friday with Prime Minister Alexis Tsipras.