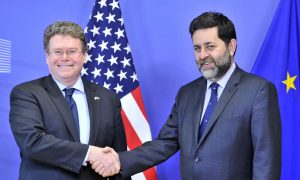 David Judson: Hi. I’m David Judson, editor-in-chief at Stratfor. With me today is George Friedman, Stratfor’s founder and chairman. Thank you for making some time, George.

David: We’ve had a lot of internal discussions now about what’s coming around the corner. Can you give us a glimpse ahead? I was really intrigued by a remark you made in one of the memos floating about here saying China is not going to drive American policy. The Middle East is not going to drive American policy. Europe will be at the center of the policy agenda in the near future. Can you amplify that?

George: I put it a little differently. American policy will be driven by what today’s news is. History is going to be driven by Europe. It is still taken all together as the most prosperous place on Earth. It is historically filled with ties to the Third World and everything else. It’s in terrific crisis, an economic crisis that’s turned into a social crisis and is becoming a political crisis. The crisis economically is its inability to find a solution to what happened to it after 2008. The social crisis is that one part of Europe — Germany and Austria — is doing relatively well. Southern Europe is in a catastrophic position. The political crisis is that there has been a tremendous decline in trust in the EU. Not only in the EU but in the European elite. The Eurocrats who believe so deeply in this project, there are opponents emerging, and that opens the door to the possibility of the re-emergence of real European nationalism, of which we see signs. When Europe gets nationalistic, the world gets nervous.

David: In the piece you wrote last week about the fall of the Berlin Wall, you spent a lot of time talking about the collapse not of the wall but of Marixism, of the new-left ideologies that really dominated your youth and mine in the 1960s and 1970s. The interesting thing in Europe is that while the right is evolving in doing its own thing, the left, if we want to call it that, really echoes back to the 1970s. The new political party in Spain called Podemos is calling for minimum income and a lot of ideas that would have made sense in the 1970s, but the contest is really between the center-right and this populist far-right, it seems to me. Is that too extreme an assessment?

George: I don’t think so. When we go back to the 1920s, which was the last time we had this sort of massive economic and socialist function, the Communists outside of the Soviet Union were certainly active, but the real power emerged in the hands of Mussolini and Hitler and other pretty right-wing regimes. There is a strand in European life that is anti-modern, that is highly nationalist, and there’s also racists, to some extent. At bad times, this strand emerges. The European left, divided between the intellectuals and the workers and so on, never quite coalesced into something that could, as Lenin did, seize control of Europe. When we look at these crises, there is a historical precedence for what we are seeing, which is the emergence of the far-right.

David: How far do you want to go out in predicting the dynamics of the far-right? There’s some pretty disturbing things going on. Is it going to get as nasty as the 1930s or thereafter?

George: We first have to face two things. This situation is unsustainable, and the Europeans have no solution for it, so it’s not as if we’re going to wait, and it will work itself out. Different countries, not just Greece but France and Germany, are deeply at odds over matters of fundamental national interest on how to proceed within this context. In that sense, the nation states are now the major vehicle in Europe, not the European Union. That’s where its being made. In some cases it’s benign. In France at this moment, Hollande is pursing the interest of France, but beneath the surface, even there is the national front of Marie Le Pen, and in other countries, hard right-wing groups. So I would argue that the European Union is failing. What naturally re-emerges is the nation state that never really went away, and the real question we have is in leading the resurgence of the nation state, are you going to have centrist-rightist parties, or are you going to have hard-rightist parties? That’s really going to depend in part on how Germany and the European Union respond to this process. If they become assertive, if they become aggressive to maintain the status quo, it will get nastier.

David: We just came off the G-20 where there’s talk of “too big to fail” and reforms of the banking system. Any thoughts on that? There’s been an interesting sub-debate going on about the prescription being given for what ails Europe actually being a tonic that could kill the patient.

George: The problem here is that six years ago, we had a banking crisis. From the standpoint of the European leadership and the standpoint of many in the national community, that’s still the fundamental question. At a time when Spain has 25 percent unemployment, this is sort of like putting a Band-Aid on a hemorrhage. This is the real problem of the EU. It knows how to engage a banking crisis now. It doesn’t know how to deal with the social calamity, and so the G-20 thing is a symptom of the underlying problem. Certainly the banking issue is fundamental, but as long as this unemployment continues, the banking system can never be truly stable because demand for goods from Germany, which exports 50 percent of its GDP, can’t be filled. You can’t solve the problem so long as you have numbers like you’re seeing in Southern Europe.

David: On that cheerful note, let me quickly pivot to the BRICs because we’ve been talking about the problems of China’s transition and its struggle to reinvent its economy. We’ve recently seen Russia struggling, particularly with the price of oil. Now we see some signs of turmoil in Brazil, so that leaves the BRICs with India. We go from BRICs to I. Any thoughts on how that’s going to play out in the international system here?

George: Well, for a temporary period, the BRICs, which have nothing in common but a cool name, were dynamic powers in the international economic scene. These things always pass. Japan was once the dynamic power on the international scene. The real question is what do they return to? China appears to be returning to lower growth and a dictatorship to contain blows. Russia is obviously dealing with the problem. It’s a one trick show. It has got energy, and if the price goes down, they’re in trouble. Brazil is having a cyclical downturn, that because of mismanagement, could well turn into a long-term downturn. So what countries are going to emerge to replace them? We’ve talked at Stratfor a lot about the post-China 16, which are 16 countries amalgamated that show signs of growing. Beyond that, this much is clear: Europe is in deep crisis. The BRIC countries are no longer performing the way they were. For bettor or worse, the only country that is showing signs of improvement is the United States, and that is, I think, the most important thing to take away from this conversation. As dumb and stupid and weird as the United States is, it’s the one that is growing the fastest. It’s the one that is developing the lowest unemployment.

David: Well some people can take hope from that. Some will not. In either event, join us here at Stratfor to follow up on this. Thank you very much. Thank you, George.