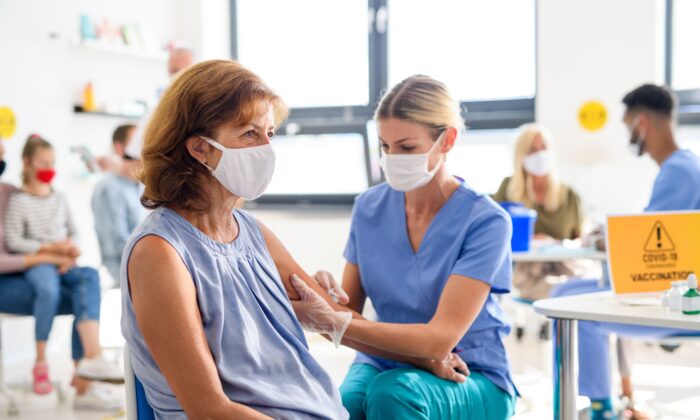 Studies suggest that vaccines may lead to neurological issues in the brain. (Halfpoint/Shutterstock)
By Jack Phillips

The European Union’s counterpart to the U.S. Centers for Disease Control and Prevention (CDC), said there’s no urgent need to deploy COVID-19 vaccine boosters, coming a week after federal health officials recommended them and set a Sept. 20 deadline.

On Sept. 2, the European CDC stated that booster doses for individuals who are fully vaccinated aren’t needed for the time being.

“Based on current evidence, there is no urgent need for the administration of booster doses of vaccines to fully vaccinated individuals in the general population,” the EU agency stated, adding that its “report also notes that additional doses should already be considered for people with severely weakened immune systems as part of their primary vaccination.”

The agency stated that the priority now is to “vaccinate all those eligible individuals who have not yet completed their recommended vaccination course” and stressed that there’s a difference between booster shots and additional doses provided for individuals with weakened or compromised immune systems.

The European Medicines Agency last month concluded that more data is needed on the duration of the protection conferred by COVID-19 vaccines before it could recommend booster shots for non-immunocompromised people.

Besides the United States, Germany and France have announced that they would provide boosters to immunocompromised individuals and vulnerable people starting in September. They cited the spread of the Delta COVID-19 variant as a reason to push the third doses out.

After top officials with the CDC and Food and Drug Administration (FDA) last week announced they would try to start rolling out booster shots by Sept. 20, the World Health Organization issued a sharp rebuke against wealthier nations and accused them of pushing for booster shots rather than providing vaccines to poor countries. U.S. Surgeon General Vivek Murthy, however, said that the United States can provide both booster shots for its own residents and distribute the vaccine to poorer nations.

As booster shots are being rolled out, meanwhile, concerns have been raised that the extra doses would shift the definition of what it means to be “fully vaccinated.”

For example, in Israel, which is one of the most vaccinated countries in the world, health officials recently began declaring that individuals who have received three—not two—COVID-19 vaccine doses are “fully vaccinated.” Holders of Israel’s vaccine passports have to get a third dose of the Pfizer mRNA vaccine within six months of their second shot or they could lose the pass.

“We are updating what it means to be vaccinated,” said Israel’s COVID-19 response coordinator, Salman Zarka, during a recent news conference, reported The Wall Street Journal.

Stocks for AstraZeneca, which administers the majority of vaccines in EU countries, were up by about 1.19 percent as of mid-day trading on Sept. 2.