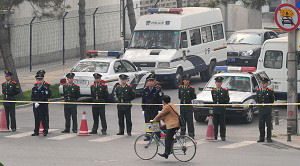 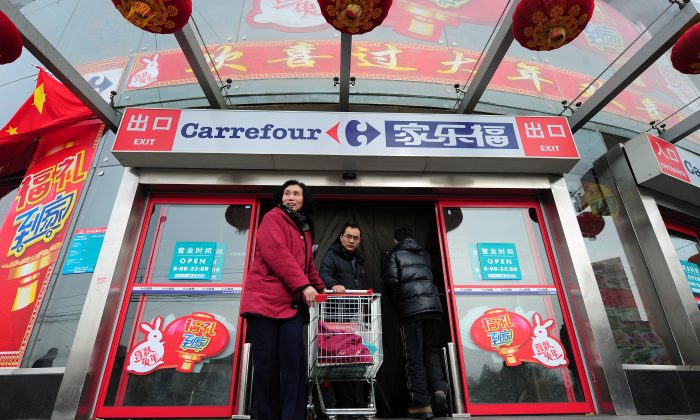 Shoppers step out of a Carrefour store in Beijing on January 27, 2011. The French retailer announced on June 23 it will sell the majority of its China business to local e-commerce firm Suning.com. (Frederic J. Brown/AFP/Getty Images)
China Business & Economy

Carrefour, Europe’s largest retailer, became the latest Western firm to retreat from China after selling the majority of its struggling business in the country to a local retailer.

The French group said on June 23 that it agreed to sell 80 percent of its China operations to electronics retailer Suning.com, which is partially owned by Chinese e-commerce giant Alibaba. The all-cash deal is worth 4.8 billion yuan ($705 million).

Carrefour will retain a 20 percent stake in its China business, but the sales agreement grants it the option to sell that remaining stake.

The company joins a spate of Western retailers that have retreated from China in recent years, such as Tesco, Marks and Spencer, and Best Buy. Meanwhile, U.S. e-commerce giant Amazon will be closing its Chinese e-commerce store next month.

Carrefour, which has been in the China market since 1995 and has almost 240 stores across the country, has been struggling in recent years, partly because of fierce competition from domestic online grocery-delivery stores, such Alibaba’s Freshippo and JD.com.

These Chinese e-commerce operators, which offer speedy delivery and competitive prices, have been chipping away at the market share of foreign retailers in the country.

Hypermarkets—retailers such as Carrefour whose stores are larger than 6,000 square meters—have steadily been losing market share in China, according to data by consultancy firm Bain & Co., as cited by The Wall Street Journal. Hypermarkets’ share of the overall retailer market in China has dropped to 20.2 percent in 2018 from 23.6 percent in 2014.

“The competition in China is so fierce that you really need to double down in order to win. It’s almost like a second home market, so the question is do you have enough conviction and do you have enough resources to win in China,” Jonathan Cheng, head of Bain’s Greater China Retail Practice, told Reuters.

The move by Carrefour, Reuters reported, will allow the retailer to focus on its French business, where it is facing increasing competition from brick-and-mortar rivals and e-retailers such as Amazon.

In its two-plus-decades history in China, the French retailer had borne the brunt of diplomatic mishaps.

In 2008, as Beijing was set to host the Summer Olympics, protesters who condemned China’s human rights record in Tibet showed up as the Olympic torch relay made its way to Paris. In a nationalistic act of retaliation, the Chinese regime encouraged citizens via propaganda on state-run media to boycott the French company. Local residents across multiple Chinese cities held demonstrations in front of Carrefour stores.