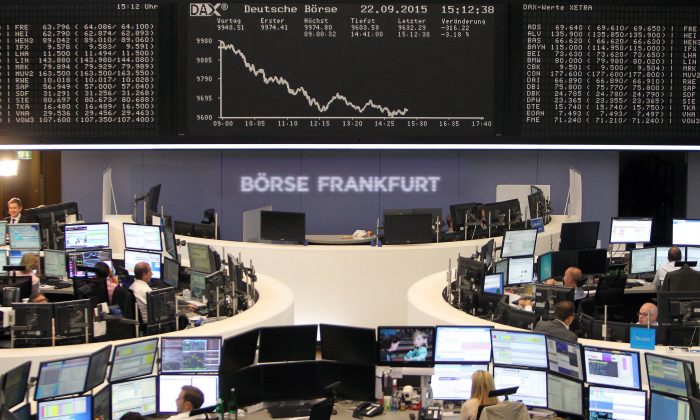 Traders work in front of a board displaying the chart of Germany's share index DAX at the stock exchange in Frankfurt am Main, western Germany, on Sept. 22, 2015. (Daniel Roland/AFP/Getty Images)
Business & Economy

NEW YORK—Europe has been a land of disappointment for years for investors. And they can’t get enough of it.

Investors are so hot for the continent that made “debt crisis” and “austerity” everyday terms that they’ve plowed more than $30 billion this year into mutual funds and exchange-traded funds that focus on European stocks, a relatively niche category that has $81 billion in total assets. The move is part of a broader migration into foreign stock funds and away from many U.S. stock funds, which have been some of the best performers since the financial crisis.

Several motivations are behind the shift, including the desire to make portfolios less U.S.-reliant and more like the global stock market. The fits and starts for European stocks in recent years have also opened up another attraction, particularly when compared against a U.S. market that has gone nearly straight up for years until recently: Vive la valuation.

“I think it’s a fairly logical shift: People are seeing more value outside the U.S. than inside the U.S.,” said Rob Lovelace. He is a senior member of the management committee of Capital Group, whose American Funds family is home to some of the largest international stock funds.

The flows into Europe have been erratic. When worries have flared about Europe’s debt troubles, Russia’s involvement in the Ukraine, or how European exporters will cope with a weak global economy, dollars have headed out of the region. Those risks remain, as does the possibility that a weaker euro could dilute returns for U.S. investors.

Here’s a look at what’s attracting investors to European stock funds, as well as considerations that need to be made before joining the crowd.

Invest in what you know. It’s a phenomenon around the world, and people tend to invest heavily in stocks from their home country.

That’s why foreign stocks make up small portions of many U.S. investors’ portfolios, even though they make up close to half the global market. That’s changing.

Investors pulled a net $7 billion from U.S. stock funds from the beginning of this year through August, according to Morningstar. They pumped nearly $210 billion into international stock funds over the same time.

The surge for U.S. stocks since 2009 means they’re more expensive relative to how much profit they’re producing. The S&P 500 set its record high this summer and trades at about 16 times its expected earnings per share.

European stocks, meanwhile, have been on a bumpier ride. The MSCI Europe index is still about 30 percent below its peak from before the Great Recession, in dollar terms.

The relatively listless performance means the MSCI Europe index has recently traded at 14 times its expected earnings. While that’s not screamingly cheap, it’s less pricey than the United States.

After shrinking in 2012 and 2013, the euro area’s economy returned to growth last year. This year, growth is set to accelerate to 1.5 percent, and the International Monetary Fund expects it to improve again next year to 1.6 percent.

That’s lower than the expected U.S. growth rate of 2.8 percent in 2016, but Europe’s economy is earlier in its recovery. The European Central Bank is still in stimulus mode, while the Federal Reserve has already halted its bond-buying program and is discussing when to raise interest rates.

Profitability for European companies is well behind U.S. companies. If they can close that gap, European stocks have room to rise, said Dan Ison, portfolio manager at the Columbia European Equity fund.

Corporate profits usually set records during each economic cycle, and that’s been the case in the United States during this expansion. But European corporate profits are still below where they were before the 2008 financial crisis. Now that Europe’s economy is slowly improving, Ison expects earnings growth to accelerate.

That has him looking for companies that do lots of business within Europe to benefit from the growth. His fund owns construction and media companies, for example. One of its biggest holdings is Ryanair, a discount airline that serves leisure travelers around Europe.

Currency and Other Risks

One danger of dropping the “home bias” is that investors may introduce a new form of risk to their portfolios. When the euro or Swiss franc fall in value, it can erode or even wipe out returns for investors counting their performance in dollars.

The MSCI Europe index has returned 3 percent this year in local-currency terms, for example, but only 0.2 percent in dollars. Some funds “hedge” to blunt the effect, and the WisdomTree Europe Hedged Equity ETF and other hedged funds have become popular.

If the dollar ends up falling against the euro, unhedged funds will get a boost from the currency move while hedged funds won’t.

But if the dollar ends up falling against the euro, unhedged funds will get a boost from the currency move while hedged funds won’t.

Europe is also still working through its debt troubles, and each upcoming political election could fan further worries.

Even bigger issues may be tensions with Russia and Europe’s economic ties with emerging markets. China’s economic growth is slowing sharply, which is striking fear into European exporters of luxury goods, cars and other products.