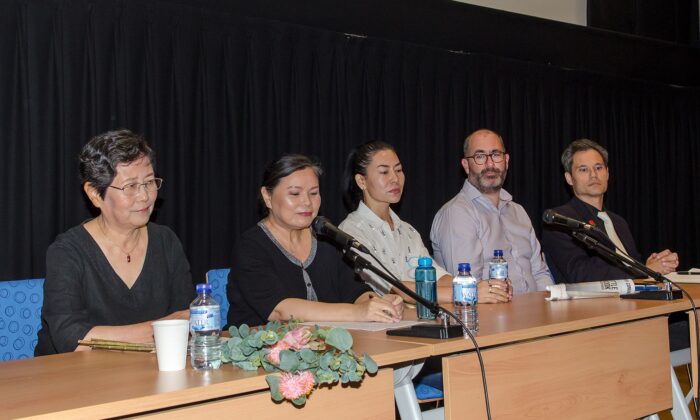 Tian Feng Ying (L) at a panel on forced labor in China following a screening of "Letter from Masanjia," in Perth, Australia, on Dec. 9, 2019. Tian is holding flower decorations similar to the ones she was forced to make while at the Shandong No. 1 Female Labor Camp between 2002 and 2005 in Jinan City, China. (The Epoch Times)
Europe

The European Commission has proposed a ban in the European Union (EU) market on products made with forced labor, with the prohibition covering all products consumed in the region, whether locally produced or imported.

The proposed ban will make a “real difference” in tackling modern-day slavery, Valdis Dombrovskis, executive vice president and commissioner for trade, said in a Sept. 14 statement.

“Our aim is to eliminate all products made with forced labor from the EU market, irrespective of where they have been made,” he said. “Our ban will apply to domestic products, exports, and imports alike. Competent authorities and customs will work hand-in-hand to make the system robust.”

In the preliminary phase, member states will assess forced labor risks from many sources, including due diligence performed by companies and submissions from civil society. Products on which “well-founded suspicions” exist that they were made with forced labor will be investigated.

Officials can conduct inspections and checks, even in nations outside the EU. If any product is identified as having been produced with forced labor, authorities can issue a withdrawal order for the item from the market and prohibit further sale of it. Companies will be made to dispose of such goods.

The proposal must be discussed and agreed upon by the Council of the European Union and the European Parliament before it takes effect.

The European Trade Union Confederation (ETUC), the main union umbrella organization in the region, has welcomed the proposal to ban forced labor.

“Many of the people in forced labor are manufacturing goods destined for sale in Europe, so a properly enforced ban should cripple the profits of the criminals behind these violations,” ETUC Deputy General Secretary Claes-Mikael Stahl said in a statement on Sept. 13.

The European Commission’s proposal follows a report released by the U.S. International Labor Organization (ILO) that estimates about 50 million people worldwide are held in modern slavery.

Half of the global total of forced labor, amounting to 15.1 million people, are in Asia and the Pacific, followed by Europe and Central Asia with 4.1 million, Africa with 3.8 million, the Americas with 3.6 million, and the Arab states with 0.9 million.

The United States has taken action against global incidences of forced labor. In 2021, for example, President Joe Biden signed into law the Uyghur Forced Labor Prevention Act, which seeks to make sure that U.S. entities don’t fund forced labor among the Uyghur minority in China’s Xinjiang region.

The Chinese Communist Party (CCP) is notorious for subjugating prisoners in labor camps and at mass-production factories. Here, mostly prisoners of conscience—such as Falun Gong practitioners—are forced into slave labor under threat of physical and mental torture.